This week’s Weekend Caption Contest™ was another smashing success. Nothing like some snotty European elitists lecturing us to follow them in their mistakes (while whining about paying US to defend them) to bring out that American “up yours” spirit. The assignment this week was to caption the following picture: 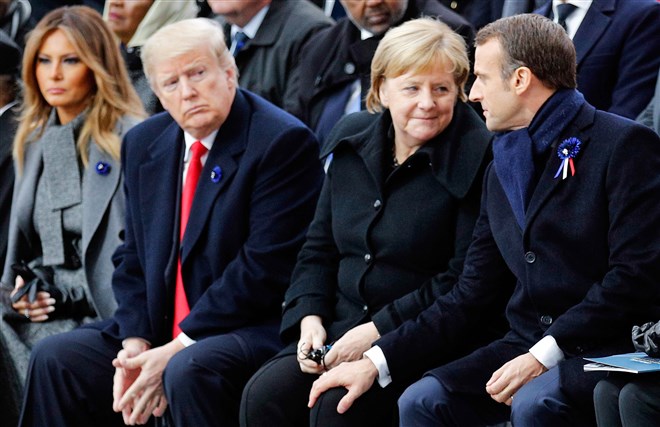 I touched a girl….. and I liked it

That ain’t no girl

(Mary Gehman) – ““I just thought I’d take a knee for the national anthem, too…””

3) (BluesHarper) – “The look you give when listening to a dumbass”

(guido81_MA) – “An army to protect against the Americans? But what about the army you already have? Oh ja, I forgot, it’s French.”

(Joe_Miller) – “You need to find a German dictator who looks at you the way she looks at Macron.”

5) (RadiCalMan) – “Boy, that Macron really goes for them Cougars!”

(Brian Brandt) – “Merkel: How about it, Emmanuel?
Macron: Sorry, Angela, you’re not old enough for me.”

(Retired military) – “Trump sits between a hottie and a nottie.”

(sarahconnor2) – “France tries to invade Germany for a change.” (Thanks, all!)

(Scorpion) – “TRUMP: Hmm. I wonder what the French word is for french kissing?”

(Paul Hooson) – “What do you call it when a German gives a French a hummer?

Having a Frog in her throat…”

(fustian24) – “Watching from home, Hillary sobs: “That should be ME rubbing Merkel’s knee!””