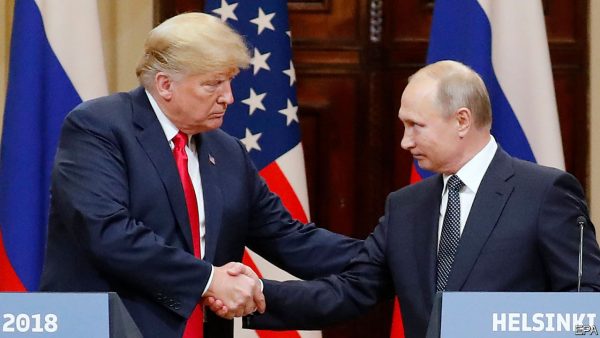 Donald Trump is the most effective US President for Foreign Policy since Ronald Reagan. When the screaming haters go after Trump as they did Monday, keep in mind that none of them has anything like the credibility Trump earned in dealing with North Korea, Saudi Arabia, and China. I should not need to remind the reader of President Obama’s dismal surrender of US interests pretty much all through his eight years as President. I should not need to remind the reader that George W Bush has a spotty record in Foreign Policy, showing great instincts immediately following the 9/11 attacks in rallying support, but losing focus in a bloody conflict in Iraq, with lost prestige among allies. I could go on, but the honest student of history will have to admit Trump has started very well.

Then we come to Russia. Before going further, I need to remind the reader that President Obama was warned of possible Russia interference with the 2016 election, but waved it off as not a valid threat. That’s on Obama, not Trump, if you believe Russia was actually an influence in the election. And let’s not forget that the ‘intelligence community’ which the media points to about ‘Russia meddling’ was led by Obama appointees – an intelligence community which Obama weaponized to advance his own political goals. Hypocrisy was their norm for years, starting with the way the Benghazi attacks were covered up. That is, since 2012 we have seen clear and undeniable evidence that the intelligence community was run by a politically biased clique. It is therefore reasonable that Trump rejected their politically-biased attempts to interfere with his policy.

That in no way means Vladimir Putin is trustworthy. But there’s a lot of lying by the media about how Trump treats Putin or regards Russian intentions. Let’s not forget that Putin not only trained to mislead western leaders, he’s been in power long enough to understand American politics. Direct confrontation, which the media demands from Trump but never did from Obama, would be easily blunted by Putin through simple denials. Despite what Democrats and the media would have you think, summits produce results behind closed doors through negotiation, not confrontation and accusation. Everyone involved knows this, so it’s absurd to see Democrats and the media blatantly lie as they have. So let me explain why they are doing that.

There was no collusion between the Trump campaign and the Russian government. Yes, some will claim that there is no proof that collusion did not occur, but the Mueller investigation has gone on so long with such dismal results, assisted by a media which rabidly hates Trump, that if any evidence really existed it would have been produced long ago. Also, the American justice system has long advocated the premise of ‘innocent until proven guilty’. Therefore, by any reasonable standard President Trump must be presumed innocent. Trump haters can claim this does not ‘exonerate’ Trump as he has said in tweets, but really, it’s long past time to stop beating this dead horse.

But the demised equine is exactly why the media/Democrats demanded Trump confront Putin. If Trump were to demand that Putin “stop” meddling with American elections, the media would use that to claim Trump was admitting the Russians did influence the 2016 election, a lie that serves only the Left. If Trump were to tell Putin publicly that he agrees with the intelligence leaders (who took office under Obama and who were essentially weaponized by Obama) , then Trump would be tied to attacks against him by Obama’s mandarins. It’s a dirty trick, and Trump is not falling for it.

But that brings us back to how to deal with Russia’s ambitions. There’s no question Putin has bullied the Baltic states and has used natural gas as an economic weapon. Russia under Putin has reached out to China to make new deals and sign new alliances (although it’s interesting to me to note that China has recently been more responsive to Trump than to Putin). While I don’t see Russia as intending to hurt the United States or provoke military confrontation, I do believe Putin means to gain influence and power relative to the US. Putin certainly expects the US to confront him on these concerns, which means he has drawn up responses to a number of possible direct confrontations. This means that an indirect approach would be the best way to raise those issues, and to couch them in terms which offer something Russia wants in exchange for correction of behavior the US finds offensive. You may have noted that Trump’s behind-doors meeting with Putin lasted almost twice as long as scheduled, which is what happened with Trump meeting in China. This means that Trump at least has worked to lay a foundation with Putin for future discussions, and he may have established some common ground for cooperation.

Cooperation between adversaries has a long history. Most agreements concerning oceanic rescue, regarding cooperation in Antarctica, and regarding open-sea piracy were created between major powers with opposing intentions on many other issues and areas of interest. Trump has already made a number of important statements regarding Russia in economic and military terms. It should be noted that the aircraft incursions over US airspace which were common while Obama was President ended soon after Trump took office. That’s just one sign of good change that the media (and the Democrats, of course) missed or ignored. Never forget that Trump has a lot of experience in negotiations, sometimes with people who refused to even speak to him. Trump understands how to determine reasonable expectations, how to reach common ground, and how to beat expectations.

This does not mean Trump will turn Russia into America’s best ally, but looking back to the last four Administrations Trump has certainly done an acceptable job so far. The enemy here has agents named ‘Anderson Cooper’ and ‘Chuck Schumer’. Russia is merely the pretext.