This week’s Weekend Caption Contest™ was rather quiet for such a monumental photo. You’re all getting THE LOOK. The assignment this week was to caption the following picture: Democrats cried when the Iron Curtain fell, too.””

4) (Retired military) – “Trump “Do you want to see the American press say that your country having nukes is a good thing for world peace?”
Kim “The American press would never say that”
Trump “Here hold my beer and watch this””

6) (TheyTukRJobz) – “It is with great honor that I announce that President Kim and I are now covfefe.”

(Mary Gehman) – ““You see, Kim, liberal heads explode on their own, without any nukes at all…””

(rodney dill) – “Remember the first rule of World Leader Club. No one talks about Hillary….”

(yetanotherjohn) – “Hillary fell into my drink.

What is she doing?

Define "Conservative"
The Fitting End Is Just Right Out 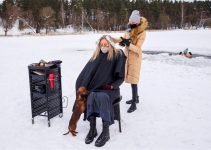