Remember clock boy?  You know, the kid who took apart a clock and re-configured it to look suspiciously like an IED?  Yeah him.

Well, the former good news, that he was leaving these United States for Good (and making them a better place thereby) failed to hold up.  He and his father, like the bad pennies they are, showed up again in 2017 to sue various press outlets for defamation.  They bombed.

Slow learners that they are they then proceeded to sue the Irving Texas School District, where once again, they have bombed.

By Kevin Daley, the Daily Caller

U.S. District Judge Sam Lindsay dismissed the lawsuit [redacted] “Clock Boy” [redacted] brought against the Irving Independent School District Wednesday, after he was wrongfully arrested for bringing a device to school that resembled a bomb.

The device at issue was a homemade clock, not a bomb. As [redacted] is a Muslim [mohammedean] and the son of Sudanese immigrants, the incident was widely attributed [by progtards and progtards with bylines] to ethnic and religious stereotyping, prompting the lawsuit.

[redacted]’s father, [redacted], filed the complaint on his son’s behalf. The suit alleged that the school district discriminated against [redacted] on the basis of race and religion, in keeping with a [non-existant] long history of bigotry in the Irving schools. It also claimed his Fourth Amendment rights were infringed when authorities questioned him for over an hour and a half without his parents.

In turn, the city of Irving said administrators acted legitimately to ensure school safety, even if they were mistaken.

Dismissed with prejudice, and all reasonable costs “taxed to the plaintiffs.”

It is no coincidence that I redacted the names the miscreants.  Feel free to substitute asshole and assholes father. 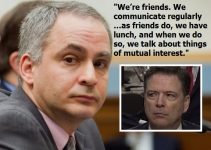