Home
Categories
Liars, Lawyers and Bears: Where The Journey Goes From Here

The facts of all the hearings, media noise, and highly emotional claims have confused a lot of people. There are many who still believe President Trump is guilty of some kind of crime, and his supporters are desperate to deflect or end Mueller’s investigation. There are an increasing number of people who believe the Democrats tried to rig the election, that Mueller’s investigation is itself a desperate attempt by Democrats to avoid the public learning about their crimes. There are also a lot of people who ignore the crisis, because they are not aware of all the relevant facts.

This post will not cover everything which has happened, but will instead paint a path for how we got here, and where I think we go.

So Who is Christopher Steele? Christopher Steele used to be a government employee.
FISA memo: Steele fired as an FBI source for breaking ‘cardinal rule’ –leaking to the media
Steele started his own company (Orbis Business Intelligence) to tell stories for money. He created a 35-page fiction which he sold to the Clintons as intelligence reports on Trump. We now know that FBI and DOJ employees used the dossier as the basis to open a FISA warrant against Trump associates.

We also know the dossier has been discredited, proven false.

Steele’s himself backed off his claims when he was sued in court over them.

Submission of evidence known to be false in pursuit of a FISA warrant is illegal.
FISA Memo Released and Fraud on the FISA Court Revealed | American Center for Law and Justice

The Democrats knew the dossier was bogus. So did the Republicans. Yet Democrats and Republicans agreed to set up Robert Mueller as Special Counsel. Per Biography.com, Bob Mueller grew up in a wealthy New York family, attended a private board school in New Hampshire with John Kerry. Mueller went to the Ivy League school (Princeton) that his dad attended, and earned a degree in Politics. He then earned a Master’s in International Relations from New York U.

After college, Mueller served with distinction in Vietnam, earning the Bronze Star, two Navy Commendation medals, the Purple Heart and the Vietnamese Cross of gallantry as a Marine. Following his return from Vietnam, Bob Mueller joined a San Francisco law firm (Pillsbury, Madison & Sutro). After becoming US Attorney for Northern California in 1976, Mueller in 1982 move to Massachusetts also as a US Attorney. Mueller was US Attorney for the District of Columbia in 1995, then returned to California in 1998.

Mueller’s law work included the prosecution of Manuel Noriega, the Boston marathon bombings, and an investigation into NFL star Ray Rice.
Bob Mueller became an acting deputy attorney general for the Bush Administration in 2001. Mueller became FBI director in July 2001 after former director Freeh retired. Trump ran for the White House in 2012 but bowed out early, then in 2016 won the Presidency of the United States.

During his career, Mueller badly mismanaged the 2002 Anthrax scare, publicly blaming an innocent man (which led to a lawsuit the FBI lost), yet he never admitted even a single mistake. Mueller also led an investigation into the disappearance of $12 billion in cash sent to Iraq, but failed to make even a single arrest in that case. Mueller was apparently aware of the Fast and Furious scandal, but again made no arrests of any of the federal officials involved.

In November 2017, Newsweek ran a story claming aides said Mueller was “hot-headed” and would not accept criticism from anyone.

Mueller, then, is apparently a self-serving mandarin who makes mistakes but won’t admit them. Strange to see that kind of man in charge of an important investigation.

Then there is the matter of Mueller’s team. Why did Mueller appoint so many Clinton supporters to his team? Reflect a rather obvious bias, to the point that Mueller can be said to have no intention of an objective investigation.

So why hasn’t Mueller been fired?

By now, it’s obvious that there is no collusion between Trump and Russia. Anyone still shilling conspiracy to rig the election via Russia is delusional, lying, or both. There’s no evidence anyone colluded with Russia (and for those who want to point to contacts with Russian officials by Trump team members, bear in mind that Obama’s team did exactly the same thing in 2008 [ US Elections Come to Moscow and Flashback: That Time When Barack Obama Secretly Reached Out To Russia And Iran ], and no one said boo about it).
Essentially, that leaves Obstruction of Justice and Money Laundering as possible charges. Money Laundering charges have been filed against Paul Manafort for that, but – so far at least – there is no evidence that Trump was involved in any way. Frankly, there is a lot more reason to look into ‘financial irregularities’ on the Democrat side of things,
https://www.investors.com/politics/commentary/the-anatomy-of-hillary-clintons-84-million-money-laundering-scheme/ and

Obstruction of Justice is where the fun really gets going. First off, that’s a charge prosecutors love. It’s very serious-sounding, and the charge is so broad you can usually find a way to indict anyone on it.

The key point is to understand that where Trump himself is concerned, Mueller cannot press charges himself; he can only submit a report and recommendation to Congress. While some Republicans may have mistrusted Trump at first, by now they understand that Mueller’s investigation is crooked. Worse, from the politicians’ point of view, Trump’s rising poll numbers and the success of his programs so far mean he is legitimate. So, there is absolutely zero chance that the Republicans would impeach Trump, or even come down on him. That leaves Mueller two options: Wait until 2019 and hope he delivers his report to a Democratic-run House of Representatives, or think through the situation and actually do his job the way he originally promised. Keep in mind that there is no chance at all that Democrats would get the 67 Senators needed to actually convict Trump in an impeachment trial, and if Trump is impeached by a Democrat-led House but is rising in public support, the subsequent trial might cause voters to back Trump for a second term in 2020. Therefore, any attempt to impeach Trump, even under a Democrat-led House, is low reward for high risk, making it unlikely to happen.

Mueller took the job as Special Counsel, I think, because he wanted a capstone success for his career. While he continues to deny his responsibility for the Anthrax and Fast n’ Furious investigations, I believe Mueller wants to get a big win. He is smart enough to know he face long odds trying to impeach Trump … but he may well realize he has other targets of value. The case against Hillary Clinton for money laundering, for example, or an Obstruction of Justice case against James Comey, is more than half in place already, and Mueller would make history for himself if he made that case.

I wonder if the Democrats understand that possibility?

Weekend Caption Contest™ Winners Week of February 9, 2018
Who Stands Behind The Curtain 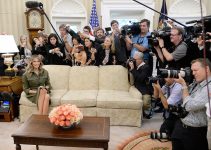