This week’s Weekend Caption Contest™ inspired a lot of captions-so many that we have three winners per place. I guess not having to listen to or look at Pelosi and Schumer is something to celebrate! There were way too many excellent captions to honor, so go read the rest of the entries. The assignment this week was to caption the following picture: (Kenny Moore) – Not what I had in mind when I demanded transparency.

2) (jim_m) – Trump sits with all the democrats who want to see America be a great country.

(yetanotherjohn) – Let the minutes show that there was no dissent and that the vote to build the wall was unanimous.

3) (Stephen_Macklin) – Clint only did this with one chair. Sad.

(cathymv) – Schumer must be dead, he is never fashionably late for a photo op

(Olsoljer) – Like Diogenes still looking for an honest man. (Won’t find one there).

(Mary Gehman) – “…they must have gotten the address wrong…”

5) (RadiCalMan) – So, Nancy let’s hear about your plans to “Make America Great Again”!

(Par4Course) – Trump finds this meeting with Chancy (Chuck and Nancy) much more pleasant than all the others.

(Wild_Willie) – “Chucky, if you get up on your booster chair the camera can see you.”

(Blues Harper) – “that chair will be emptier today when Pelosi sits in it.” – Dennis Miller

(sarahconnor2) – “Looks like they had a Kennedy drive them here.” (Thank you, my fellow posters!)

(DJD60_TX) – I see Ms. Pelosi has left her “mark” again. Can someone get a new chair and some Lysol?

(Retired military) – Meanwhile in another part of the WH 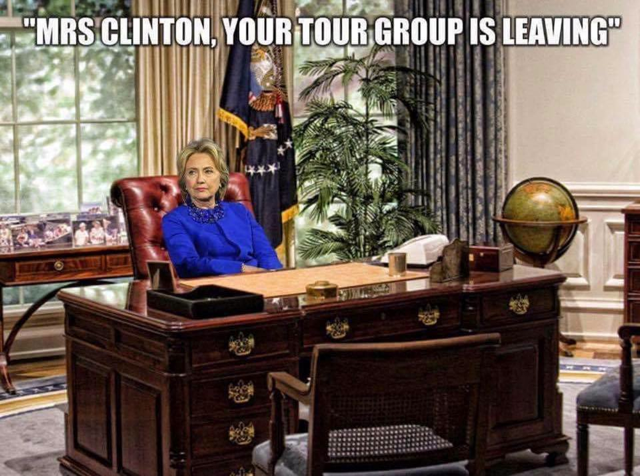