Headline courtesy of Austin Bay writing at Instapundit, who notes it is the buried lede of the articles about the assault.

MY HOW MEDIA QUICKLY FORGET DEMOCRAT VIOLENCE AGAINST REPUBLICANS: I just scanned the two articles linked by Glenn and Stephen regarding the physical assault on Senator Rand Paul. It appears media need a reminder. Senator Rand Paul was on the baseball field the day Democrat terrorist James Hodgkinson launched his terror attack. That would be June 14, 2017.

NBC News doesn’t mention the June 2017 attack and Senator Paul’s presence on the field. The Daily Caller article doesn’t mention it (Glenn’s post) nor does The Hill report (Stephen’s post).

Mentioning Hodgkinson strikes me as appropriate. Rand Paul was there and he survived the terror attack.

IT CONTINUES: The Washington Post mentions Steve Scalise but fails to mention that Paul was on the field when Scalise was wounded.

FINALLY: The UPI mentioned it.

He began practicing ophthalmology in 1993 in Bowling Green, Kentucky,

Isn’t it time, and past time, for crazy dhimmocrat control?

A senior adviser for Rand Paul says the U.S. senator is recovering from five broken ribs following an assault at his home.

Doug Stafford said it is unclear when Paul will return to work since he is in considerable pain and has difficulty getting around, including flying. Stafford said Sunday that the broken ribs include three displaced fractures, which can lead to life-threatening injuries. The severe pain can last for weeks or months.

Police arrested 59-year-old Rene Boucher on Saturday and charged him with misdemeanor fourth-degree assault with a minor injury. Boucher is accused of attacking Paul on Friday, but officials have not released a motive.

I think those charges need to be changed to felony assault and battery. 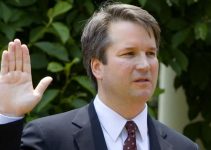