Home
Culture Of Corruption
The Boomerang of Truth

Sometimes truth is a boomerang.

I have often commented here on Wizbang that the left in general, and the hard left in particular, have epic projection issues.  What they piously warn of or condemn in their political foes are the very things they have done or intend to do.

Related: The Steele dossier was a Clinton/DNC-funded operation supported by the FBI and influenced heavily by Russian operatives in the Kremlin.

The country has spent the last year with Obama intelligence officials, the media, and Democratic leaders pushing a narrative of Trump collusion with Russia to steal an election that was supposed to be won by Hillary Clinton. A meeting between Trump officials and a Russian who falsely promised dirt on Hillary Clinton is the best evidence — by far — to support this narrative.

Yet here we have the realization that the Clinton campaign, the DNC, and the FBI all worked wittingly or unwittingly with Russians to affect the results of the 2016 election. Far from just meeting with a Russian and not getting dirt on a political opponent, these groups wittingly or unwittingly paid Russian operatives for disinformation to harm Trump during the 2016 election and beyond.

Worse, these efforts perverted our justice system by forcing the attorney general to recuse himself for the crime of having attended meetings with Russian diplomats and spawning a massive, sprawling, limitless probe over Russia. These things are so much more damaging to the republic than a couple thousand dollars in ads on Facebook paid for by Russian trolls about a pipeline protest.

Sessions should un-recuse, fire Mueller, and start investigating everyone involved with this.

Indeed he should. In point of fact I believe this to be a criminal conspiracy which was enabled by the FBI, the Department of Justice, and the former President of the United States. FEC Complaint Lodged Against Hillary Clinton and the DNC, for Breaking FEC Disclosure Requirements By Deliberately Concealing Their Payments to FusionGPS

Hillary and the DNC didn’t want to be tied to the FusionGPS, the smear firm.

So they had their lawyer pay them. Then no one can ask the lawyer about it, because he’ll claim — dubiously– that he has a “lawyer-client privilege” extending in both directions, from his client to the person he hired for his client.

Then in Hillary’s FEC filings, she lists her payments to the lawyer for “legal services,” omitting to note that those legal services including the not-at-all-legal-services of paying FusionGPS to dig up dirt.

A complaint filed with the FEC says it’s not legal, as the law specifies that any payment of $200 or more by a campaign must be specified as to its use, and this, obviously, was done with the intent to hide the money’s use.

John Sexton says you just can’t read the article here, but you have to read the filing, which he says makes a compelling case with little wiggle room in the noose for ol’ Hilly.

Check at Hot Air later. He’ll be posting about this, with his own commentary and citing the best parts of the filing.

I was waiting for him to post, but I want to get this up now, as more and more people are re-reporting it.

But do check in to see what he has. He did actual work, going through the filings.

Let the hits, and the charges, keep on coming.

Another shoe hits the ground (via Liz Shield at PJ Media’s Hot Mic):

The Justice Department announced last night that it will release a confidential informant from his agreement so he may testify before Congress and present his evidence that the RUSSIANS were trying to win favor with kickbacks and corruption in a deal that ultimately gave them control of 20% of the U.S. uranium supply.

“As of tonight, the Department of Justice has authorized the informant to disclose to the Chairmen and Ranking Members of the Senate Committee on the Judiciary, the House Committee on Oversight and Government Reform, and the House Permanent Select Committee on Intelligence, as well as one member of each of their staffs, any information or documents he has concerning alleged corruption or bribery involving transactions in the uranium market, including but not limited to anything related to Vadim Mikerin, Rosatom, Tenex, Uranium One, or the Clinton Foundation,” spokesperson Sarah Isgur Flores said.

Cutting Back the Infernal Revenue Service
Why Politicians Have Less Power Than They Think
Tags:Democrat Culture of Corruption 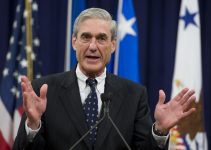