1) (Retired military) – Kim “so did the letter from Trump say exactly how I was supposed to fit it in my ass? and why is clock counting down?”

(Mike) – “Why exactly is ACME violating the embargo?” 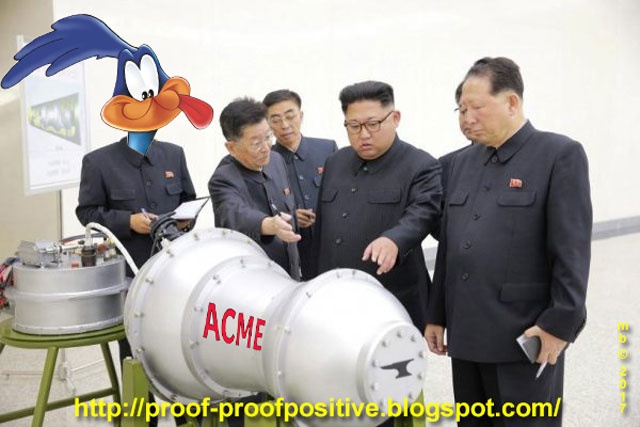 3) (Mary Gehman) – “This is great! Now, we can dry clean these pantsuits before we return them to Hillary.”

4) (McG) – “You need to paint something really scary on this end. Like maybe a picture of a North Korean nuclear bomb.”

(yetanotherjohn) – Then, when dear leader broke into ‘Gingham style’ the scientist were really freaked out.

5) (Rick Adams) – You can’t hug your children with nuclear arms. You can, however, get a METRIC SHITETONNE of money at regular intervals from nervous Western nations.

(Porkopolis) – Coming this fall from Sony Pictures! The long-awaited re-make of the beloved classic:

Dr. Strangelove or: How I Learned to Stop Worrying and Love the Bomb

(Paul Hooson) – The North Korean version of The Three Stooges? But, the catch-phrase is, “Nuke, nuke, nuke…”.

(Joe_Miller) – Missing from this photo is the general who thought it would be funny to call the first bomb “Fat Man.”

The Readers Choice Award this week goes to two winners who tied:

(cathymv) – I know its a bomb, but not as big a bomb as Hillarys Presidential run

(Brian Brandt) – What do you mean, “Acme is not a real weapons company?”

(TheyTukRJobz) – Yes, Fearless Leader. You just put your penis in here for a half-hour every day and 6 months later, it will be a powerful 6 inches long!

(RadiCalMan) – Thanks to Bubba, this is where we are today; aren’t you glad we won’t have to find out what Hillary would do next!