This week’s Weekend Caption Contest™ celebrated the ancient ritual of trying to watch an eclipse while also trying not to watch it. The assignment this week was to caption the following picture: 1) (yetanotherjohn) – If Trump doesn’t see his shadow during the full eclipse, he’s president until at least 2021.

2) (guido81_MA) – Hee-hee, maybe I should point out that the sun is “kinda white” so I can watch the CNN debate on how to permanently eclipse its privilege.

3) (Mike) – “Slightly cloudy with a chance of awesomeness!”

She’s stalled and won’t go away either.

5) (McG) – “If he has to be looking at something else smiling like that, I’m just glad it’s a celestial phenomenon and not a younger supermodel.”

(Retired military) – Trump “Ha. I see that eclipse and raise you one of my own” 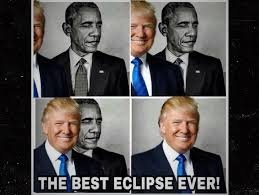 (douglube) – And I thought only Chuck Norris could stare down the sun.

(OlSolJer) – MELANIA: Donald, there is a antifa dressed body splattered all over our sidewalk!

PRESIDENT: Yeah, I know honey, here comes another one. Gotta love them bikers!

(rodney dill) – “Look, The moon is giving the sun a Lewinsky.”

(Paul Hooson) – When he got spattered with white he just assumed it was a bird. Then, he noticed Bill Clinton standing on the balcony waving…

(Rick Adams) – I’m not entirely sure what’s going on in this photograph, but orange you glad Hillary is not President?