This week’s Weekend Caption Contest™ was a bigly success. We have over 200 entries so we have double winners per place The assignment this week was to caption the following picture: (yetanotherjohn) – “The art of the wheel”

(cathymv) – “Trump stopped at a roadside diner for lunch and ordered a cheeseburger, coffee and a slice of apple pie. As he was about to eat, three limousine liberals walked in, Pilosi, Schumer and Clinton.

Pilosi grabbed Trumps cheeseburger and took a huge bite from it. Schumer drank Trumps coffee, and Clinton wolfed down his apple pie. Trump didn’t say a word as he paid the waitress and left.

As the waitress walked up, one of the liberals growled, “He ain’t much of a man, is he?”

“He’s not much of a driver, either,” the waitress replied. “He just backed his 18-wheeler over three limousines.””

(fustian24) – “Trump loves to sing “Born in the USA” because it pisses off Bruce Springsteen so much.”

(Retired military) – “I’m not sure what is going on here but Hillary still isnt President,. 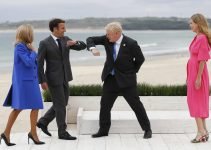