The Cubs won the World Series. The FBI declined to prosecute a blatant violation of National Security Law. Donald Trump was elected President of the United States.

Then President Trump was sworn in as President and the progtards and the establishment proceeded to melt down. The Democratic Party returned to their Ante-bellum seccesionist selves…

The Metaphysics of Trump

We variously read that Trump should be impeached, removed, neutralized — or worse. But until he is, are his appointments, executive orders, and impending legislative agenda equally abhorrent?

General acclamation followed the Trump appointments of retired Generals H. R. McMaster as national-security adviser, James Mattis as defense secretary, and John Kelly to head Homeland Security. The brief celebration of Trump’s selections was almost as loud as the otherwise daily denunciations of Trump himself. Trump’s equally inspired decisions, such as the nomination of Neil Gorsuch to the Supreme Court and Jeff Sessions as attorney general, presented the same ironies.

Most of these and other fine appointments came amid a near historic pushback against Trump, mostly over what he has said rather than what he’s done. But again, do the appointments create a dilemma for his existential critics who have gone beyond the traditional media audit of a public official and instead descended into calls for his removal — or worse? Indeed, removal chic is now widespread, as even conservatives ponder impeachment, invoking the 25th Amendment for mental unfitness, while the more radical (here and abroad and both Right and Left) either abstractly or concretely ponder a coup or some other road to his demise.

No regular reader of Wizbang will mistake me for a Trump partisan. As I wrote on Inauguration Day:

I agree with Glenn Reynolds who notes that President Trump has already exceeded his expectations. Then again, that is a low bar.

That having been said, I both hope and pray that he does well, and acts in the best interests of the Nation as a whole and the Constitution.

Since I am in no way emotionally invested in him as a politician, failure on his part to do and act as I hope and pray is merely reason to work to replace him at the earliest opportunity..

I note for the record that the earliest opportunity will be January of 2021.

Again, the point is, How do critics square the circle of damning Trump as singularly unfit while simultaneously praising his inspired appointees, who, if they were to adopt a similar mindset, would never set foot in a Trump White House? How does someone so unqualified still manage to listen to advice or follow his own instincts to appoint so many willing, gifted public servants — at a time, we are told, when nearly the entire diplomatic and security establishment in Washington refuses to work for such a reprobate?

The same disconnect holds true for Trump’s executive orders. Except for the rocky rollout of the temporary ban on immigration — since rectified and reformulated — his executive orders seem inspired and likely to restore the rule of law, curb endless and burdensome new regulations, address revolving-door ethics, enhance the economy, halt federal bloat, promote energy production, and create jobs. Without the Trump victory, the Paul Ryan agenda — radical tax reform and deregulation — that has been comatose for a decade would never have become viable. So, is the position of the conservative rejectionists something like the following: “I detest Trump because even his positive agendas are spoiled by his sponsorship?”

I think Dr. Hanson underestimates the reflexive rejection of all things Trump by the Washington Permanent Establishment and overestimates the professionalism of both the press and the federal civil service.

I thought that both Bush presidents were fine and good men and their agendas far preferable to the alternative. But was either in a political position to effect (or perhaps even willing to embrace) the sort of conservative change that the supposedly “not a conservative” Trump might well attempt? That irony too raises another metaphysical question: Does the Trump moment come despite or because of his take-no-prisoners rhetorical style?

As the situation continues to develop I am coming to the conclusion that Trump has the room to maneuver because of his brash manner. I thus find myself in the interesting position of deploring his boorishness while embracing his policies to date. I guess I shall have to lump boorishness with stupidity in this case, as his effectiveness is hard to dispute. 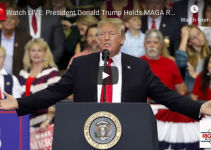