This week’s Weekend Caption Contest™ was more like it! Over 400 entries but three winners per place is my max. Don’t blame me; blame the Russians. There were way too many excellent captions to honor, so go read the rest of the entries. The assignment this week was to caption the following picture: (fustian24) – “Biden saw them and asked why all the Trekkies were in town.”

(rodney dill) – “The Electoral College is going to great lengths this year to protect their persons and privacy.”

4) (Restless Legs) – “In case Michelle does not leave willingly.”

(DJD60_TX) – “In a daring assault on popular culture, all of Trump’s appointees are wearing white after Labor Day!”

5) (Steven Modica) – “Due to safe space overflow, we had to call in reinforcements.”

(Mike) – “‘Equal opportunity’ my arse! There’s not a Wookiee or an Ewok among them!”

6) (Scorpion) – “Due to the unrest among the Secret Service concerning Hillary assignments, President Trump unveils her personal drone security detail.”

(Joe_Miller) – “If they never hit what they aim at, where will the next generation of storm troopers come from?”

(Paul Hooson) – “How come the new STAR WARS is only playing in theaters?

Democrats - Not Russians - Sunk Clinton
Do the Obamas need cheese to go with their whine? 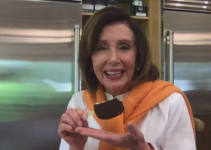