Home
2016 Election
Everybody got this broken feeling, Like their father or their dog just died

Our Summer of discontent has now rolled into an Autumn of malfesance, as the scorched earth campaign lumbers on. The Great Disappointment of 2016

What I’m thinking about this week is a focus group led by Peter Hart, the veteran Democratic pollster, Tuesday night, in Charlotte, N.C., still a toss-up state. Present were a dozen late-decider voters, three Democrats, six Republicans and three independents.

What struck me about the group wasn’t its new insights, which were few. What was powerful was its averageness, its confirmation of what you’ve already observed. The members weren’t sad, precisely, but they were unillusioned. They were seeing things with clean eyes and they were disappointed. They wanted a candidate they could trust and believe in.

Which when you think about it shouldn’t be too much to ask.

When asked to describe the America they want, they wrote things like “a solid education system,” “no longer at war,” “people have joy in their work,” “leading the world in everything, including morals,” “equal opportunity and reward based on work,” “people haven’t lost their homes” and “a culture that improves us as a people.”

“This ain’t that movie”, as Valentine said.

I remind you, as I remind myself, that Duty is not subject to mood. 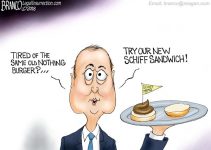