Donald Trump is to politics what the fox is to Aesop’s fables.

Here is what the fox did when he couldn’t get what he wanted:

“A Fox one day spied a beautiful bunch of ripe grapes hanging from a vine trained along the branches of a tree. The grapes seemed ready to burst with juice, and the Fox’s mouth watered as he gazed longingly at them.

The bunch hung from a high branch, and the Fox had to jump for it. The first time he jumped he missed it by a long way. So he walked off a short distance and took a running leap at it, only to fall short once more. Again and again he tried, but in vain.

Now he sat down and looked at the grapes in disgust.

“What a fool I am,” he said. “Here I am wearing myself out to get a bunch of sour grapes that are not worth gaping for.”

And off he walked very, very scornfully.”*

Now, along comes Donald Trump, who has seen the grapes of the American Presidency.

Trump can’t reach the grapes because of his flaws and errors. So, how does he respond? Walter Brasch explains:

“Donald Trump, losing to Hillary Clinton in every major national poll, long ago brilliantly figured out how to continue to rally his base. Instead of dealing with issues, he attacks Clinton, the mass media, and calls the election rigged…

… His hyperbole and paranoia extend beyond his political life. Trump previously declared that balloting for the Emmys is rigged, and that his show, “The Apprentice,” should have won an Emmy several times. The Academy of Television Arts & Sciences, and its 20,000 members, disagreed with Trump’s opinion.
Trump’s tactic is resonating with his hard-core base that see conspiracy and deception in every corner — in workplaces, in government, and under their beds.” *The Fox & the Grapes, from Library of Congress website.

**The irony about the 2000 presidential election is that Albert Arnold Gore, Junior tried to win in Florida by violating the U.S. Constitution. Yet, when the U.S. Supreme Court put an end to such cheating on Gore’s part, Bush was the one accused of winning unfairly. To this day, there are still people who insist that the 2000 election was stolen from Gore, when the truth is just the opposite. No amount of evidence will convince these people that they are mistaken, just as no amount of evidence will convince Birthers that Barack Obama really does have an authentic Hawaii birth certificate. Something about politics brings out the infantile in people.

To Donna Brazile: The "Doctor" is NOT In!
Weekend Caption Contest™ Winners Oct 21, 2016
Tags:Donald Trump 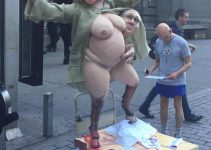