I want to address another flaw in the Democratic Party: The Party has a bad habit of trying to give away a non-existing free lunch.

“Hillary Clinton on Wednesday proposed a plan to eliminate college tuition for most families, a topic pushed by Democratic presidential primary rival Bernie Sanders. Under the plan, families making $125,000 or less will pay no tuition at public, in-state universities and colleges. “The plan will be phased in over five years, but families earning $85,000 or less will immediately be able to attend an in-state college or university without paying any tuition,” reads an announcement on Clinton’s website. The presumptive Democratic presidential nominee also unveiled a plan to use executive actions to offer a three-month moratorium on payments for those with federal student loans.” 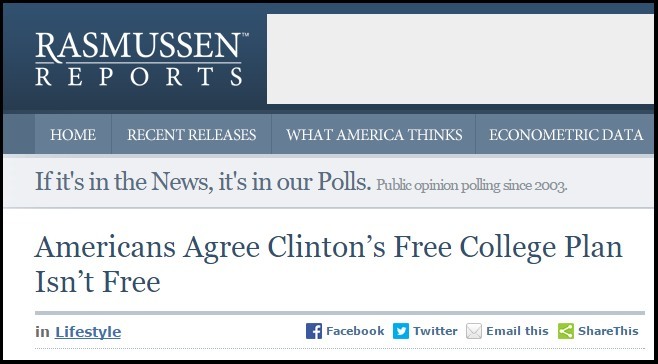 “The government’s spending capacity is, in the end, limited, and every dollar that you spend on one thing is a dollar that cannot be spent on something else. Virtually all of Clinton’s “pay fors” are concentrated on a relatively small number of affluent-to-rich people, and because of that, they represent a large cut of those incomes; if she managed to enact all of her plans, her top bracket would be inching close to a marginal tax rate of 50 percent before you factor in state and local taxes that can easily add another 10 percentage points to that figure.

Even if you think that it would be politically possible to extract taxes at those levels, and that you could do so without causing any unwanted economic side effects, the question remains: What do you do for an encore? After enacting Clinton’s agenda, America will still need to fix Medicare, Social Security, state and local pensions, the disability insurance program, and so forth. And given that Democrats have proven as unwilling as Republicans to raise taxes on the middle class, where are we going to get the money?

What America needs, much more than free college tuition, is a comprehensive plan to bring our outflows roughly in line with our inflows over the long term. A sensible agenda would first figure out how to pay for the things we’ve already promised to do, and then see if we have the stomach for even higher taxes to cover new spending. Instead we keep piling on the new spending while ignoring the old promises. When the bill comes due, it will be a humdinger. And the politicians who ran up the total will be long gone.”

McArdle is correct. The Democrat politicians who promise a non-existing free lunch won’t be stuck with paying the lunch bill; the American public will be.

So, don’t expect me to get on the Democratic Party bandwagon, because it needs its own repair job.

Shut UP, The Progressives Cry
Treason, Not
Tags:Democratic Party