How unrealistic can Democrats be? See for yourself.

“[Donald] Trump said his plan would provide six weeks of maternity leave “to any mother with a newborn child whose employer does not provide the benefit” by tackling fraud in unemployment insurance. For the six-week period, the mother would receive the equivalent to unemployment benefits while she is out of the workplace. This would not apply to fathers, though.”

Donald Trump is promoting paid maternity leave, something that the Democratic Party has been wanting for years.

Has the Democratic Party commended Trump? No, of course not.

The Guardian also reports, “Maya Harris, a senior policy adviser to the former secretary of state, described Trump’s plan as “half-baked and completely out of touch”. In particular, she described the Republican’s proposal for paid maternity leave as “not just regressive, deficient, demeaning and damaging for women” because it only applies to women and pegged to unemployment benefits, not the actual workplace salary of the mother.”

Giving paid maternity leave to women is regressive, deficient, demeaning and damaging for women? On which planet? Not on planet Earth, that’s for sure.

Meanwhile, The Hill reports the following:

Trump’s proposal is also politically unrealistic, Pelosi said, because many Republicans — long opposed to mandatory paid leave — are reluctant to back it.

“This isn’t just about something you put out on a piece of paper, it’s about what is sustainable about it. Can he get the votes? People in his own party who were at the announcement said they weren’t for it. So it isn’t real, and Hillary Clinton’s is, and she has the full support of the Democrats,” Pelosi said during a press briefing in the Capitol.”

In other words, Democrats have moved the goal post. Now, they want more than just paid maternity leave.

Pelosi accuses Trump of being unrealistic when it is Clinton’s plan that is unrealistic.

Apparently, Pelosi is hoping that Clinton’s plan will go the way of Obamacare – having no Republican votes but turned into law anyway. We all know how that turned out.

If it would work, if it actually provided paid maternity leave, then Trump’s plan would be reasonable.

It is also reasonable to have such paid leave be akin to unemployment insurance. The reason is that there is a big difference between having a work-related injury and being pregnant.

If a woman chooses to participate in sexual intercourse and becomes pregnant as a result of that choice, then she and the man who impregnated her are responsible for the pregnancy, not the woman’s employer.

Trump is trying to help women without promising a fictional free lunch. Doing so could help Trump win.

Thus, some Democrats are grasping at straws.

Why? The answer may be in this headline courtesy of The Hill: 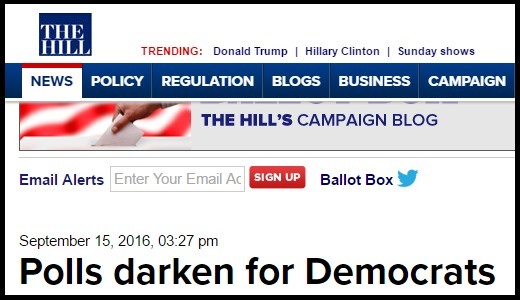 Personal Note: My late wife took unpaid maternity leave when she was pregnant with my son. It would have been nice if she had been given paid leave, because she and I were not wealthy.