One of the surprises of this election cycle is the civil war between the Right Wing pundits who opine for a living.

The cause of the war is the rise and possible fall of Donald Trump.

The latest salvos in this war have come from Jonah Goldberg and Sean Hannity.

Here is Goldberg writing about Hannity:

“In his latest tirade — or, I should say, in one of his latest (there have been so many) — Sean Hannity tears into the “Jonah Goldberg class” as if it were, you know, like a thing.

. . . The fury Sean brings to this shtick is really quite . . . adorable. It’s like a puppy barking to protect its master from a parked car or a small child vowing to vanquish all of his enemies with his plastic sword. As he ratchets up the rhetoric in order to establish his “stabbed in the back” excuse for after the election, there’s an almost “Come on! I’m really serious you guys!” feel to the whole thing.”

This punditry play is reminiscent of a scene in the movie MASH, in which Margaret Houlihan (portrayed by Sally Kellerman) . . . 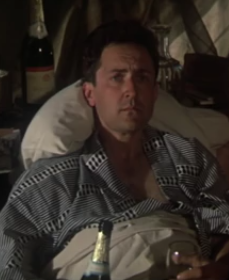 . . . and threatens to resign her commission if Blake doesn’t have surgeons Pierce, McIntyre and Forrest arrested.

In other words, Jonah Goldberg is shrugging off Sean Hannity’s “accountability” rant.

Hannity ends his yapping at Goldberg with this gem:

Hannity has real work to do? Since when?

Anyway, Hannity errs by assuming that any pundit on the political Right can sabotage Donald Trump. The only person who has sabotaged Trump is himself.

Hannity needs to get a clue. Perhaps another puppy named Blue can give him one.