Is the fat lady already singing for Donald Trump? According to White House Dossier editor Keith Koffler, the answer is “No.” He explains why in his LifeZette commentary “Note to MSM: This Race Isn’t Over”.

Koffler writes, “Well, Hillary may be measuring the drapes in the Oval Office, but it’s hardly curtains for Donald Trump. For many reasons, Trump is in far better shape than he seems — and is actually in an excellent position to win.”

Independent Women’s Voice president Heather R. Higgins agrees that the fat lady isn’t singing yet. Higgins writes, “Nothing is ever certain, and much could go wrong, but my money remains on a Trump victory.”

Trump campaign senior policy adviser Peter Navarro also doubts that the singing will happen. Regarding the upcoming presidential election, Navarro writes, “A record number of voters will likely show up for this showdown — and Trump has a very good chance of winning once one really assesses the chessboard.”

The above-stated claims that Trump will still win have been given some statistical support. A 08/29/16 ABC News headline says, “Hillary Clinton’s Lead Cut in Half in New National Poll”.

ABC News reports, “The change shows some signs of a post-convention bump wearing off among likely voters: She’s lost 10 percentage points among nonwhites, 9 points among college grads, 7 points among women and voters under 35 years old, and a slight 6 points among liberals and Democrats.”

So, is it possible that Donald Trump could still win?

A year ago, this writer told everyone to stick a fork in Trump because Trump was done. That claim resulted in this writer looking like this: On the night of the 2000 presidential election, NBC News made the mistake of calling that race prematurely. Upon realizing the mistake, Tom Brokaw looked into the TV camera and said to the NBC audience, “Ladies and Gentlemen, we don’t have egg on our face. We have an entire omelette.”

This writer doesn’t want to make an omelette. So, he will not say that the fat lady has started to sing for Trump. Besides, he doesn’t want to listen to a twenty-minute-long aria. 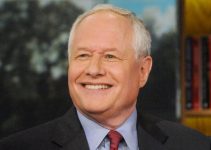