Orange is a good color for Hillary Clinton. She must think so, too, because she wears it often enough.

Clinton is wearing orange in her official State Department portrait. 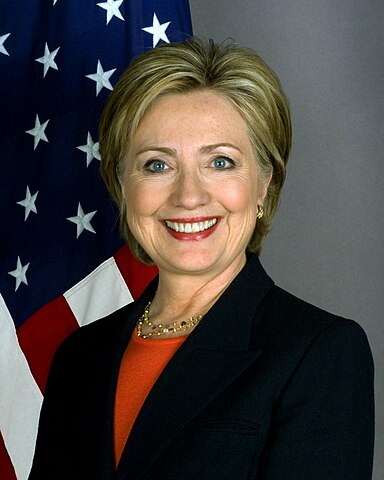 She has more than one orange pantsuit that she wears while campaigning.

Indeed, plenty of Americans think that Clinton should be wearing an orange suit every day, specifically this suit: This writer agrees that Hillary Clinton should be wearing prison orange. The reason has nothing to do with her being a Democrat or her supporting liberal ideas.

The reason that she should be wearing prison orange has everything to do with what she deliberately did while she was the U.S. Secretary of State. She exclusively used a private email account and private server for her job.

Forget about Clinton using a private server to cover up the close tie between the State Department and the Clinton Foundation.

Forget about the things that the FBI Director said about her use of the server.

Instead, think about this: When Clinton decided to use her private server exclusively for her work, how did she expect to send and receive classified information? By carrier pigeon?

Seriously, was Clinton so naive as to think that she could use her private server exclusively for her work without classified information passing through it?

This writer does not believe so.

Clinton knew exactly what she was doing. She didn’t care, because she didn’t expect to be caught.

Even if she were caught, she could feign not knowing that classified information would go through her server.

Besides, if she were caught, then who working for the Obama Administration would have the will to punish her for doing so? After all, Clinton is Democratic Party royalty.

As it turned out, Clinton was right.

So, being that Clinton isn’t wearing prison orange as she should be, it is up to voters to punish her by refusing to elect her President.

Sure, Donald Trump has said plenty of bad stuff, but that’s just it. Trump’s words are just words of a political candidate.

In contrast, Clinton’s deeds were the deeds of a federal official. Her use of her private server exclusively for her work was a deed that went too far.

“The espionage statute that criminalizes the knowing or grossly negligent failure to keep state secrets in a secure venue is the rare federal statute that can be violated and upon which a conviction may be based without the need of the government to prove intent. . . The criminal case against Mrs. Clinton would have been overwhelming. The FBI acknowledged that she sent or received more than 100 emails that contained state secrets via one of her four home servers. None of those servers was secure. Each secret email was secret when received, was secret when sent and is secret today. All were removed from their secure venues by Clinton, who knew what she was doing, instructed subordinates to white out “secret” markings, burned her own calendars, destroyed thousands of her emails and refuses to this day to recognize that she had a duty to preserve such secrets as satellite images of North Korean nuclear facilities, locations of drone strikes in Pakistan and names of American intelligence agents operating in the Middle East under cover.”

Clinton might have escaped federal prosecution, but she doesn’t have to escape a deserved political fate, which in her case is the loss of the presidential election in November. Johnson the Presidential Candidate
Is Twice Enough To Declare A Pattern
Tags:Hillary Clinton