This week’s Weekend Caption Contest™ paid tribute to the woman who doesn’t understand all that hard computer stuff and security issues in Middle East embassies but, darn it all, she is the “most qualified” to be POTUS. Since there were over 200 captions, we have two winners for each place. The assignment this week was to caption the following picture: (cathymv) – “Watching Hillary speak is like watching the story of the 7 dwarfs in menopause: Itchy, Bitchy, Sweaty, Sleepy, Bloated, Forgetful and All Dried Up.”

(yetanotherjohn) – “An inspiration to all little girls that if they marry a man who would become president, be willing to kill friends who become inconvenient in Federal parks, lie continually with a straight face, develop the largest criminal enterprise in America under the guise of a charitable foundation, expose your country’s secrets and sell your soul to the devil, they to have a shot at becoming president as long as their primary opponent is an old Jewish man and not a young black man.”

3) (David Robertson) – “Senator Amidala, sitting in the audience: “So this is how liberty dies … with two thumbs up.””

4) (Stephen_Macklin) – “Taxes and regulations are going …”

(rodney dill) – “Hillary displays her opposable thumbs…. The rest of her is pretty opposable as well.”

6) (Jeffrey Ostermiller) – “Here stands a woman from Arkansas,
Who contemptuously flouts the law.
And while attempting to set a precedence,
to become our first lady President,
she scoffs, “What difference does it make, after all?””

(Retired military) – “They went all out for this convention. They even rolled out HIllary’s soul in its ice prison.”

(Joe_Miller) – “I know my home insurance covers a zombie apocalypse, but what about this?”

(Olsoljer) – ““These people will never believe what all this free shit will really cost them.””

(jim_m) – “The guardian angel on her right shoulder having left in disgust years ago, the devil on Hillary’s left shoulder is now completely in control.”

(Par4Course) – “I’m no longer sitting around with my thumb up my ass like I was the night of the Benghazi attack.”

(yetanotherjohn) – “I am totally disgusted that I didn’t win the whining award. Obviously you must sleep at the same time as the judge (I don’t want to win it enough to say you sleep with the judge … is there an apathy award?)”

Faith Applied to Politics
What Have We Learned? 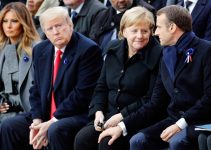