The Black Lives Matter movement sprung from a perception that police officers display racial bias. It would be reasonable to ask if that perception is true.

Harvard economist Roland G. Fryer, Jr. decided to find out. In an interview with the New York Times, he states, “You know, protesting is not my thing, but data is my thing. So, I decided that I was going to collect a bunch of data and try to understand what really is going on when it comes to racial differences in police use of force.”

Fryer’s study An Empirical Analysis of Racial Differences in Police Use of Force was published just recently, and its abstract begins with this:

This paper explores racial differences in police use of force. On non-lethal uses of force, blacks and Hispanics are more than fifty percent more likely to experience some form of force in interactions with police. Adding controls that account for important context and civilian behavior reduces, but cannot fully explain, these disparities.

Here is a chart that the New York Times uses to explain the study’s results. Lest someone think that only non-compliant citizens get roughed up by the police, here is another chart revealing the study’s results. 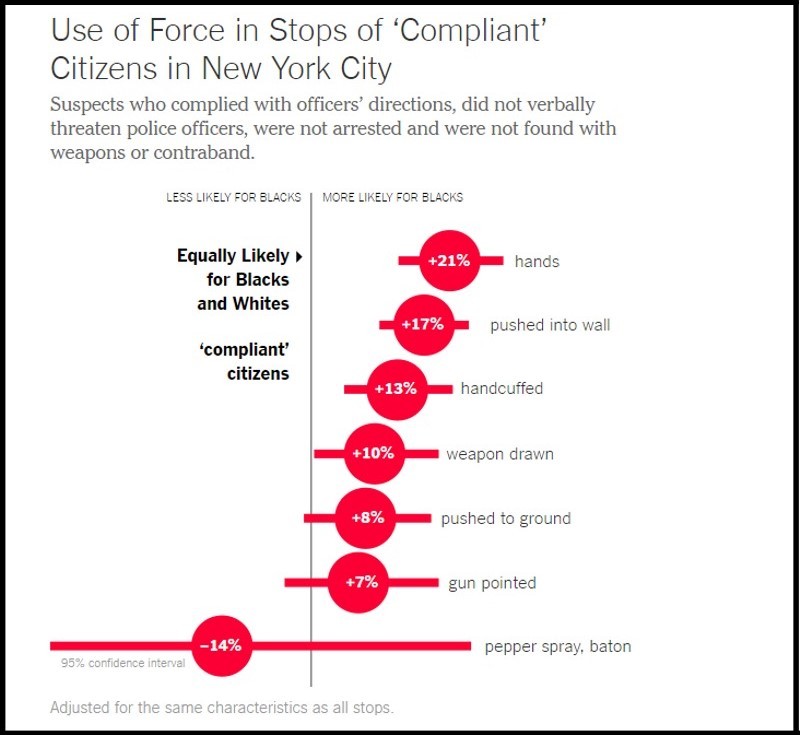 Fryer states, “Who the hell wants to have a police officer put their hands on them or yell and scream at them? Every black man I know has had this experience. Every one of them.”

That police officers might use excessive force is a fact acknowledged by public officials.

Earlier this year, former Tulsa County reserve deputy Robert Bates was convicted of manslaughter. The jury in his case decided that Bates didn’t have an excuse for shooting a black suspect after the latter was face-down on the ground and subdued by other law officers.

In 2012, Dallas Police Chief David Brown fired “70 officers involved in questionable incidents, including some who faced charges of excessive use of force.”

So, black Americans shouldn’t be ignored or dismissed when they complain about bias from police officers.

On the other hand, black Americans shouldn’t immediately suspect racism whenever a non-black police officer shoots a black person.

“But when it comes to the most lethal form of force – police shootings – the study finds no racial bias.”

The study that the NYT refers to is the same study authored by Harvard economist Roland G. Fryer, Jr.

The first half of the study’s abstract is quoted above. Here is the second half.

On the most extreme use of force – officer involved shootings – we find no racial differences in either the raw data or when contextual factors are taken into account. We argue that the patterns in the data are consistent with a model in which police officers are utility maximizers, a fraction of which have a preference for discrimination, who incur relatively high expected costs of officer-involved shootings.

Here is that study’s conclusion:

“The importance of our results for racial inequality in America is unclear. It is plausible that racial differences in lower level uses of force are simply a distraction and movements such as Black Lives Matter should seek solutions within their own communities rather than changing the behaviors of police and other external forces.

Much more troubling, due to their frequency and potential impact on minority belief formation, is the possibility that racial differences in police use of non-lethal force have spillovers on myriad dimensions of racial inequality. If, for instance, blacks use their lived experience with police as evidence that the world is discriminatory, then it is easy to understand why black youth invest less in human capital or black adults are more likely to believe discrimination is an important determinant of economic outcomes. Black Dignity Matters.”