‘Tis the season of platform madness in the political parties. Individual planks in a party’s platform can make the party look naïve at best, as illustrated by the Democratic Party.

From The Hill: “Bernie Sanders won a handful of concessions in the Democratic National Committee’s platform, with the party lining up behind his vision on the minimum wage, financial regulation and other issues. A draft version of the platform was released Friday, amid an ongoing battle to get Sanders to end his presidential campaign and endorse presumptive Democratic nominee Hillary Clinton. The platform explicitly calls for a $15 minimum wage, a position long espoused by Sanders.”

Sure, raise the federal minimum wage. What could possibly go wrong?

Economist Thomas Sowell explains what could go wrong:
“How many of the people who are demanding an increase in the minimum wage have ever bothered to check what actually happens when higher minimum wages are imposed? More often they just assume what is assumed by like-minded peers — sometimes known as “everybody,” with their assumptions being what “everybody knows.” Back in 1948, when inflation had rendered meaningless the minimum wage established a decade earlier, the unemployment rate among 16-17-year-old black males was under 10 percent. But after the minimum wage was raised repeatedly to keep up with inflation, the unemployment rate for black males that age was never under 30 percent for more than 20 consecutive years, from 1971 through 1994. In many of those years, the unemployment rate for black youngsters that age exceeded 40 percent and, for a couple of years, it exceeded 50 percent. The damage is even greater than these statistics might suggest. Most low-wage jobs are entry-level jobs that young people move up out of, after acquiring work experience and a track record that makes them eligible for better jobs. But you can’t move up the ladder if you don’t get on the ladder.”

Then there is the impact on consumers. Do Democrats really think that an increase in the cost of goods and services won’t follow an increase in the federal minimum wage? As economist Walter E. Williams says, “There is an ignorance and/or incapacity of being able to think beyond stage one when evaluating public policy.” Stage One for the Democratic Party is the raising of the federal minimum wage. If it occurs, then Stage Two will occur as well, and in Stage Two, everyone suffers more as a result of Stage One.

Although the Democratic Party may have naïvety as an excuse for a rotten plank, the Republican Party has no such excuse for one of its own.

Regarding the Republican Party’s platform, GOP delegate Tony Perkins states, “The party platform is a statement of principles and priorities. The party is about local control, it’s also about privacy and safety.”

The GOP platform is about privacy? As Robin Hood’s Merry Men would say . . .

In the story GOP platform fight gets heated over LGBT rights, The Hill describes how Perkins and like-minded delegates promote the GOP’s interference in private issues, and they don’t hide the fact that they are using the GOP platform to promote their religious beliefs.

If being a conservative means trying to force the public to conform to one’s religious beliefs, then it is no wonder that the word conservative is an expletive to some Americans.

The U.S. Constitution forbids turning the USA into any kind of a theocracy. Yet, the GOP is filled with people who want to do just that, and Tony Perkins is leading them.

Naïve Democrats and theocrat Republicans . . . they should all walk the plank. Side Note: Instead of insisting that the federal minimum wage be raised, the Democratic Party would do well to tackle those things that drive up the cost of goods and services. The GOP, in turn, would do well to push back against the false claim that the USA’s legal code is based on the Ten Commandments. 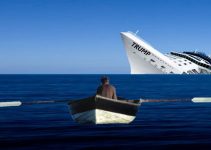