This week’s Weekend Caption Contest™ seemed to not generate much excitement. C’mon, folks-if Obama is smiling, your heart should start beating faster…in fear of what he will do to America next. The assignment this week was to caption the following picture: Trudeau: “Not so much. Mainly jokes about beavers…”.”

The Readers Choice Award this week goes to 914’s caption. Here are two more great ones:

(jim_m) – “Shooting for the remake of Dumb and Dumber was cancelled after the teleprompter broke and 0bama could not remember any of his lines.”

And one more in honor of our nation’s birthday:
(LiberalNightmare) – “Two of the greatest minds in North America, (And if you believe that, you probably believe that Bill Clinton and Loretta Lynch were talking about their grand kids in her jet last week)”

"Where are the geniuses who will figure out how to fight a hidden yet determined international band of beasts who are committed to death...?"
"Is it possible to be a sophisticated psychiatrist and believe that evil spirits are, however seldom, assailing humans?" 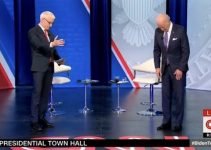