U.S. Attorney General Loretta Lynch has put her foot in her mouth.

Here is an excerpt from a Reuters story:

“Let me say to our LGBT friends and family … this Department of Justice, and your country, stands with you in the light,” Lynch told a news conference. “We stand with you to say that the good in the world far outweighs the evil; that our common humanity transcends our differences; and that our most effective response to terror and hatred is compassion, unity and love.”

Here is a video clip from CNN’s coverage of the Attorney General’s speech.

Sure, if we loved terrorists more, then they will stop being so mean.

Is the Attorney General really that naïve? 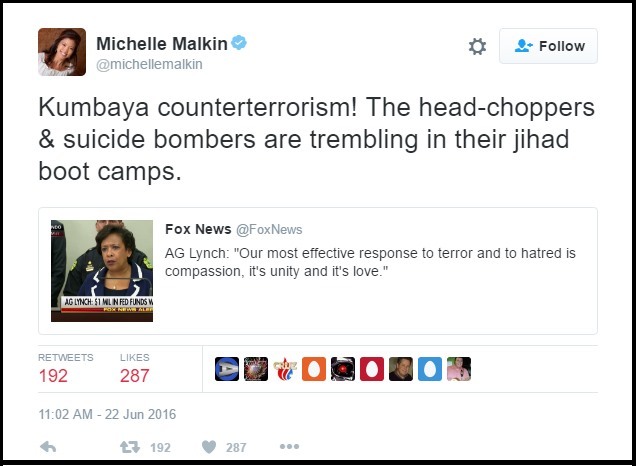 The Attorney General’s blunder comes on the heels of her initial decision to release an edited version of Omar Mateen’s 911 call in order to delete Mateen’s references to the Islamic State.

“The FBI on Monday afternoon released a full transcript of the 911 call Orlando Pulse nightclub shooter Omar Mateen made during his June 12 rampage inside the club, following pressure from news organizations and public officials.

The Islamic State, also known as ISIS, or its leader, Abu Bakr al-Baghdadi, were not mentioned in a partial transcript of the call the FBI released Monday morning. The agency said it didn’t want to provide a platform to a terror group.

Republican House Speaker Paul Ryan was among the critics of the omissions, and the agency released the full, unredacted transcript of the call in the afternoon.”

One does not have to be a libertarian, a conservative or a Republican to figure out that the current U.S. Attorney General has made the Obama Administration look like it is soft on terrorism.