One doesn’t have to have biblical expertise in order to be a reporter, but biblical literacy is helpful when one is going to refer to the Bible while writing a news report.

In that story, Peters and Alvarez write the following:

“In the weeks leading up to the killings, they pointed out, issues involving gays were boiling over in Congress and in Republican-controlled states around the country. More than 150 pieces of legislation were pending in state legislatures that would restrict rights or legal protections for sexual minorities. A Republican congressman read his colleagues a Bible verse from Romans that calls for the execution of gays. Congress was considering a bill that would allow individuals and businesses to refuse service to gay and lesbian couples.”

The congressman that Peters and Alvarez refer to is Republican congressman Rick Allen. Indeed, Allen read aloud to his Republican colleagues a passage from the New Testament book of Romans, but that passage doesn’t call for the execution of gays.

Peters and Alvarez double down with their error when they write, “Representative Rick W. Allen of Georgia, the Republican who last month read the Romans verse that says of homosexuals “they which commit such things are worthy of death” as the House was about to vote on a gay rights amendment, has not apologized.”

Peters and Alvarez have cherry-picked words from the book of Romans. They cite Romans 1:32 out of context. That particular verse is a blanket condemnation of all sinners, not just those sinners who happen to be homosexuals.

In Romans 1:18 the Apostle Paul writes, “For the wrath of God is revealed from heaven against all ungodliness and unrighteousness of men, who by their unrighteousness suppress the truth.”

In Romans 3:23, he writes, “All have sinned and fall short of the glory of God.”

In her commentary about the aforementioned misinterpretation of Paul’s writings, Mollie Hemingway explains Paul’s message to the Roman followers of Messiah Jesus. 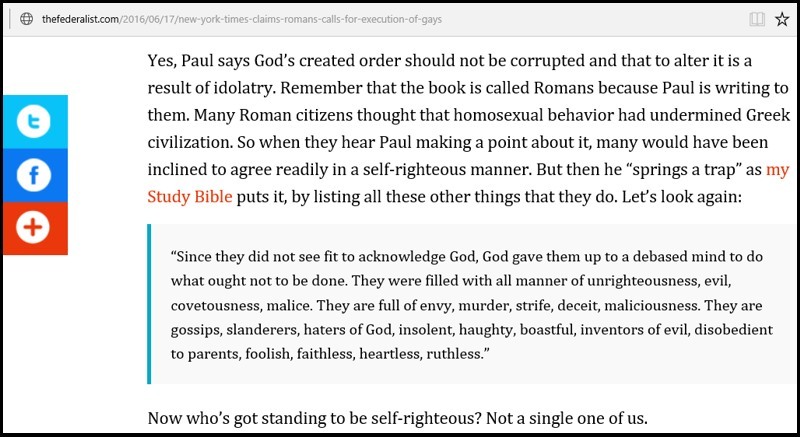 Yes, it was wrong for Congressman Allen to cite the Bible while discussing legislation. The U.S. Constitution bars members of Congress from trying to turn the USA into a theocracy of their liking.

Still, it is equally wrong to butcher a biblical passage so as to present a falsehood about its teaching, which is what New York Times reporters Jeremy W. Peters and Lizette Alvarez have done.

Indeed, only once in his writings does the Apostle Paul explicitly say that a certain person should be reprimanded for his sexual behavior, and that person was a heterosexual. Even then, Paul was dealing with a particular case inside the universal Church. Paul makes it clear that followers of Messiah Jesus aren’t to judge those who are outside the universal Church. Side Note: The case can be made that Congressman Allen himself cited the book of Romans out of context.