An example of hysteria on the left is a commentary by Slate columnist Dahlia Lithwick. Here is how she describes the freedom expressed by the Second Amendment:

“We are free to feel paralyzed and trapped in a system that is literally killing us.

What does all this have to do with freedom? Well the document that promises and protects our freedom has been interpreted to say that we are all condemned to live out our days in terror, hostage to powerful interests who urge us to become ever more free by purchasing and stockpiling ever more lethal weapons of war.”

Law-abiding private citizens who own firearms don’t share Lithwick’s fear in part because the latter own firearms.

At the opposite end of the debate are those firearm advocates who balk at the suggestion that additional firearms regulations are needed. An an example of such is in a story published by The Hill: 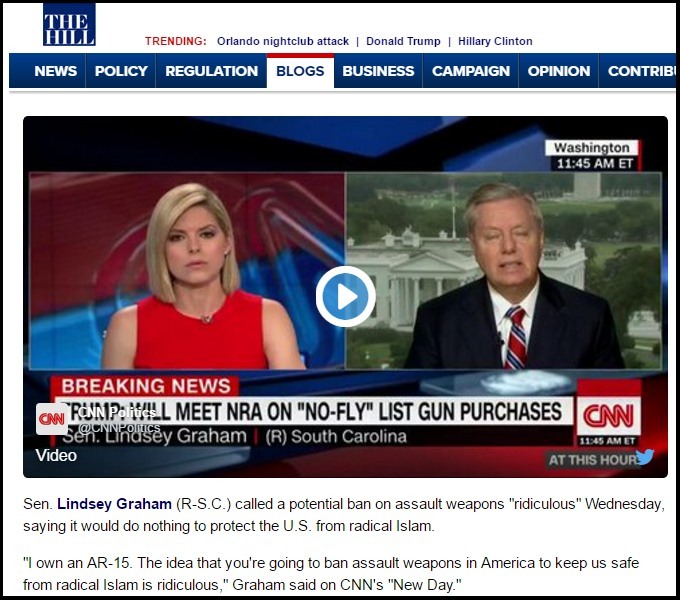 Although Senator Graham mentions his AR-15, the weapon used by Omar Mateen is a Sig Sauer MCX. The weapon’s maker advertises it as a sub-machine-gun, which makes sense, because “SIG SAUER developed the MCX rifle for America’s special forces.”

One only needs to watch this next YouTube video to learn just how easy it is for a person to conceal such a weapon.

One only needs to watch this third YouTube video to see just how fast the Sig Sauer MCX can be fired while using a magazine that holds 30 rounds of ammunition. [The rapid-fire segment starts at the 10:48 mark.]

For the sake of comparison, this fourth YouTube video shows just how fast a person can shoot 30 rounds of ammunition using an AR-15 and two magazines that hold 15 rounds each.

In a commentary about such firearms, Fox News host Gretchen Carlson asks, “Do we need AR-15s to hunt and kill deer? Do we need them to protect our families?” She also asks, “Can’t we hold true the sanctity of the Second Amendment while still having common sense?”

The American public generally favors logical restrictions on firearms and the quantity of ammunition that a firearm magazine can hold. However, as a USA Today editorial states, “The ever-powerful gun lobby stands in the way of such logical changes by twisting any move to limit the sale of certain kinds of guns into a menacing attempt to take away all guns.”

The accuracy of that last statement is displayed in an op-ed by Chris W. Cox, executive director of the National Rifle Association Institute for Legislative Action. In it, Cox writes, “It’s time for us to admit that radical Islam is a hate crime waiting to happen. The only way to defeat them is to destroy them — not destroy the right of law-abiding Americans to defend ourselves.”

Cox is feeding the hysteria about gun control with such a statement. The politicians who demand stricter gun laws aren’t trying to “destroy the right of law-abiding Americans to defend ourselves.” They aren’t trying to eliminate the ability of hunters to buy the Browning, Henry, Marlin, Remington, Ruger, Savage, Thompson and Tikka rifles sold at Bass Pro Shops. The politicians aren’t trying to prevent the purchases of the pistols that Bass Pro Shops sell, either. People could still hunt with the aforementioned rifles and protect themselves with the aforementioned pistols even if the AR-15 and the Sig Sauer MCX were never again sold in the USA. Also, limiting magazines to a maximum capacity of 10 rounds wouldn’t stop Americans from hunting or from defending themselves.

Regarding the push to restrict weapons such as the AR-15 and the Sig Sauer MCX, the USA Today editorial board states the following:

“Conveniently for aspiring mass killers, such weapons are easy to buy legally in most states. Which is one reason that after just about every mass shooting, there are calls for a national ban on this style of weapon, originally designed for war. And to outlaw the high-capacity magazines, with more than 10 rounds, that help make them so deadly.

Would these bans prevent all mass shootings? Of course not. Are they a substitute for doing everything possible to identify and thwart would-be Islamic terrorists? No. Would the bans save lives and make it harder to carry out mass murder? Yes. And that alone makes them worth doing.”

Modern-day weapons originally designed for warfare aren’t needed by the general civilian population. So, to quote American voice-actress Grey Griffin, “Can we stick to the guns that only kill a few kids instead of the ones that kill a bunch at one time?” 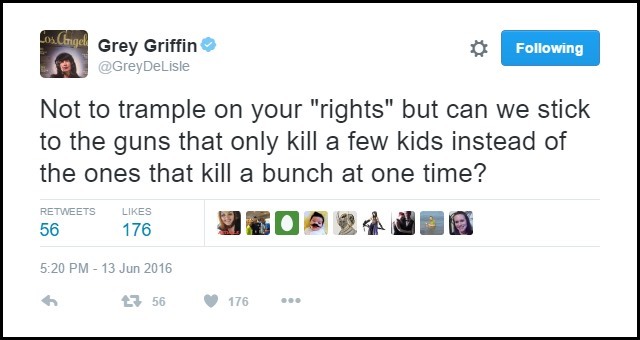 Side Note: In her aforementioned commentary, Gretchen Carlson states, “Yes, I am in favor of people being able to carry. I think some of these mass shootings would have been less deadly if that were the case.”

Carlson is correct. If the intended targets of gun-wielding criminals were able to shoot back, then such criminals could be stopped much more quickly. That is why the right of law-abiding citizens to bear arms shouldn’t be infringed.