Did you hear the joke about the blonde who mistook a math equation for terrorism?

Officials with American Airlines certainly have.

Italian economist Guido Menzio was working on a math equation while waiting for his Air Wisconsin flight to take off from Philadelphia. Unfortunately for him, Barbie was sitting next to him. Instead of saying, “Math class is tough,” as she had done previously, she declared, “Math is terrorism.” 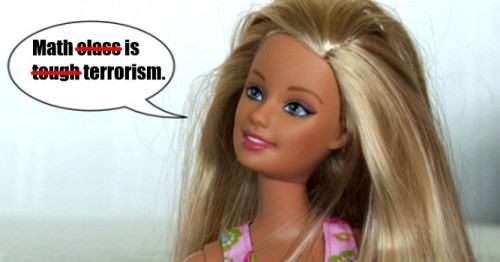 “An Ivy League professor says his flight was delayed when a fellow passenger mistook his scribbling on a math problem as a sign he might be a terrorist.

He was flying from Philadelphia to Syracuse on Thursday to give a talk at Queen’s University in Ontario, Canada. He was working on a differential equation, but said he was told the woman thought he might be a terrorist because of what he was writing.”

“The curly-haired man tried to keep to himself, intently if inscrutably scribbling on a notepad he’d brought aboard. His seatmate, a blond-haired, 30-something woman sporting flip-flops and a red tote bag, looked him over. He was wearing navy Diesel jeans and a red Lacoste sweater – a look he would later describe as “simple elegance” – but something about him didn’t seem right to her.

She decided to try out some small talk.

Is Syracuse home? She asked.

No, he replied curtly.

. . . this quick-thinking traveler had Seen Something, and so she had Said Something.

That Something she’d seen had been her seatmate’s cryptic notes, scrawled in a script she didn’t recognize. Maybe it was code, or some foreign lettering, possibly the details of a plot to destroy the dozens of innocent lives aboard American Airlines Flight 3950. She may have felt it her duty to alert the authorities just to be safe. The curly-haired man was, the agent informed him politely, suspected of terrorism.

He laughed because those scribbles weren’t Arabic, or another foreign language, or even some special secret terrorist code. They were math.”

NBC News reports, “American spokesman Casey Norton said the Air Wisconsin crew followed protocol to take care of an ill passenger and then to investigate her allegations. Norton wouldn’t specify the details of the allegations, but said officials determined them to be non-credible. The woman was rebooked on a later flight.”

With people like that female passenger giving blondes a bad name, it is no wonder that the Barbie Doll has gone bald.