Barring unforeseen circumstances, it looks like a Trump-Clinton match-up in November. Today, Donald Trump racked up a five-state sweep against his GOP rivals, Ted Cruz and John Kasich. On the other ticket, Hillary Clinton took four out of five against Bernie Sanders. While there is still a touch of wiggle-room, Trump looks like he cannot be stopped, whereas with a delegate count of 2,137 to 1,306 in her favor against Sanders, Clinton is the all-but-certain Democratic nominee.

Interestingly, the latest George Washington University Battleground Poll shows but a three-point distance between the two:

In a head-to-head matchup of each party’s frontrunner, Mrs. Clinton leads Mr. Trump by only 3 percentage points nationally (46 to 43; 11 percent undecided). Comparatively, Mr. Sanders fares slightly better against Mr. Trump (51/40/10).
“The Republican Party has a strongly favorable political environment for winning the White House,” said pollster Ed Goeas, president and CEO of The Tarrance Group. “If a mainstream Republican candidate were the presumptive nominee, the GOP would likely be in a strong position for a lot of wins, top to bottom, in November.”

Ahem. Yeah, “mainstream Republican candidate.” I suppose that eliminates Trump, but a lot about this election has been anything but conventional, and the statistical dead-heat, if it holds, promises to sustain the surreal climate that has characterized it to date.
A dead-heat notwithstanding, the unfavorable ratings for the front-runners remain high:

The GW poll found that of the five candidates still in the race for the highest office, only two—Vermont Senator Bernie Sanders and Ohio governor John Kasich—have an unfavorable rating below 50 percent, at 44 and 29, respectively. The other three—former Secretary of State Hillary Clinton (56 percent), Texas Senator Ted Cruz (55 percent) and businessman Donald Trump (65 percent)—are all mostly disliked.

How peachy. Either way, most Americans get to vote for somebody they don’t like. With the mud-flying getting ready to kick into high gear, I imagine they will like them even less.
Oklahoma's Barney Fife Convicted Of Manslaughter
Of Bubbles and Cultural Isolation 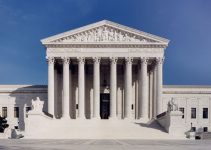