One doesn’t have to be a member of the Roman Catholic Church in order to admire Pope Francis for his efforts to promote healing within all Christendom.

From the Washington Post: “Pope Francis and the leader of the powerful Russian Orthodox Church plan a historic meeting next week in Cuba, officials said Friday, marking the most significant steps ever attempted to heal a schism that has divided Christianity between East and West for nearly 1,000 years.”

Prior to that time, the Church patriarchs worked together as equals to govern the Christian congregations in Europe, Asia and the Middle East, with no patriarch having authority over any other patriarch.

This long-standing Church tradition of equality (dating back to the Apostles) was rejected by the patriarch of Rome, who finally split away from the other patriarchs.

Today, Pope Francis is building on previous work by his immediate predecessors to promote harmony between the Orthodox and Roman Catholic branches of the universal Church, which have been at odds with each other for 962 years.

Also, as previously reported, in October of this year, Francis will be promoting harmony between the Roman Catholic branch of the universal Church and the original Protestant denomination, the Lutherans.

All of this is good from a Christian perspective, because when Roman Catholic Christians get to Heaven, they will be surrounded by Orthodox and Protestant Christians who were never ever Roman Catholics. So, they all might as well live in harmony while they are still on this side of eternity.

To learn more about the history of the Church, read Through the Ages: A History of the Christian Church by Ernest Trice Thompson, available on the Amazon website. 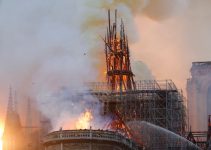