This week’s Weekend Caption Contest™ rang in the new year with our president taking his executive duties seriously. Just kidding-he decided to hang out with Jerry Seinfeld since the world is so calm right now. The assignment was to caption the following picture: 3) (yetanotherjohn) – “Unfortunately, the joke is on us and the country has elected it twice.”

4) (retired military) – “Something is wrong with this picture. It looks like Obama is working.”

Have you noticed that all the Democrat's talking points...
Antonin Scalia on Religion and the State 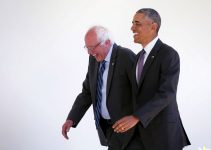