Home
Categories
No, We Don’t Have To, and Should Not.

This is sadly less of a joke than it should be: Especially given that we have a putative conservative pushing the same fatuous idiocy here.

Though I can note with mild relief that the House voted by a veto proof majority to suspend 0bama’s refugee plan.

One of the basics which is being overlooked is the nature of terrorism.  As currently practiced on the world stage terrorism is one of the later forms of Asymetrical Warfare.  Like Guerrilla (the little war) Warfare, it is a means by which a force which is no match for a conventional power can wage war effectively.

For Terrorism as a campaign to work there are several prerequisites:

It is inarguable, given the state of our Northern and Southern land borders, that terrorists may infiltrate the United States.  Which is, it should be noted, more than ample reason in and of itself to remedy our porous borders.  Nor has ICE nor TSA been notably effective in intercepting individual terrorists entering the country via more normal access points.

It is also worth noting that the FBI and TSA have testified before Congress that they cannnot adequately screen the numbers of Syrian refugees 0bama has announced he intends to admit.

Thus a mass influx of “refugees” from the Mohamedean world not only poses the threat realized in the Friday the 13th massacre in France, but also a very real threat of the sort of local supporting population required for a prolonged campaign of terrorism.

As regards access to the means to inflict mass casualties, I shan’t go into detail, though I will allow that the prevalence of small arms in American households acts as something of a counterbalance.

On the negative side, the NSA’s domestic collection and analysis is a pale ghost of the systems the French had in place before the Friday the 13th Massacre and that said effort had zero effectiveness in preventing the attack.

I also propose that any non-United States Person (where United States Person is defined as Citizens and Legal Resident Aliens) apprehended for terrorist activity be tried before a Military Tribunal as a war criminal vice being prosecuted under U. S. Criminal Law. 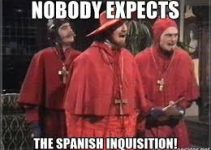