I walked away tonight from the final night of a Scripture study (Priest, Prophet and King by then Father and now Bishop Robert Barron) and was enthralled by two things, Bishop Barron’s handling of the 8th chapter of the Gospel of John and his reference to French philosopher and theorist Rene Girard’s “scapegoating mechanism”.

There’s no way I could articulate what I heard adequately but my friend Tom Zampino, who went through this same study nearly a year ago to the day, does that study, and more particularly the segment I heard tonight, great justice here:

Please note: credit for everything that follows, except for any misunderstanding on my part, belongs completely to Father Barron.

French philosopher and theorist Rene Girard long-ago developed an applicable organizing principle – a dynamic – that he believed governs much of our dysfunctional society. The “scapegoating mechanism” helps us to understand how human conflicts, tensions, and emotions often play out – obviously not in a good way, as the name itself implies. Hitler’s Germany is an all too obvious and hideous example.

A deep sense of community, of commonality, develops whenever individuals, or groups of individuals, are pitted one against the other. We have an ingrained longing to become part of a larger group, perhaps for protection, and to separate ourselves from “the other.” As a consequence, we tend to organize around like-minded people.

Later, we will attempt to remove – or at least dominate and control – any one or any other group that is perceived as different or inferior. We do this in order to release the tensions and eliminate the conflicts that necessarily arise between us. We often form “weird communities,” bound together by a common blaming of our adversaries.

We become, in short, a community of accusers.

Biblically speaking, one name often given to the evil force in the world (ha-santanis) is “the accuser.” Satan himself is the accuser, and this is a recurring theme throughout Scripture. That’s the real battle in which we are continually engaged. And it’s the enemy against which Jesus Himself stands.

Father Barron expertly illustrates this on-going struggle through the passage found in John, Chapter 8 – a favorite of Girard’s, as well as one of my own. Here we find not only a battle between competing groups, but between competing kingdoms:

Then the scribes and the Pharisees brought a woman who had been caught in adultery and made her stand in the middle. They said to him, “Teacher, this woman was caught in the very act of committing adultery. Now in the law, Moses commanded us to stone such women. So what do you say? ”They said this to test him, so that they could have some charge to bring against him.

Jesus bent down and began to write on the ground with his finger. But when they continued asking him, he straightened up and said to them “Let the one among you who is without sin be the first to throw a stone at her.”

Again he bent down and wrote on the ground. And in response, they went away one by one, beginning with the elders. So he was left alone with the woman before him.

Then Jesus straightened up and said to her “Woman, where are they? Has no one condemned you?” She replied, “No one, sir.” Then Jesus said, “Neither do I condemn you. Go, [and] from now on do not sin any more.”

Notice, first, the need to find common ground, and then accuse and place blame. Then notice the need of the community of accusers to seek refuge within a religious sanction.

But notice, too, how Jesus stands apart. He doesn’t engage the mob. He doesn’t entertain the gossip. He does not, in any way, cooperate with the community of accusers. Not in the least.

He, in fact, reverses and dissipates the momentum through silence, wisdom, and love.

Here, in short, are two kingdoms, and they are in direct conflict. One, a false kingdom of this world, of Satan, of a commonality of blame and “accusational energy.” The other, is one of forgiveness, compassion, and non-violent love. It’s a re-ordering, and a re-prioritizing of the world. This earthly community of accusers finally meets its spiritual match.

There’s much more and it’s all well worth your time.  Do yourself the favor of reading the whole thing.

You may be one who stands accused, even by those who call themselves Christians.  Or maybe you, as a Christian, stand as one doing the accusing.  Either way, Father Barron’s study for me tonight particularly drove home the necessity to recognize, in myself first when I point at another, and in the other when they’re pointing at me, whose bidding is being done.

I’m struck by how Rene Girard’s “scapegoating mechanism” has in effect become a national meme.  The parallels are striking.

In any case, Tom Zampino closes with a prayer at his place that I’m choosing to close with here, maybe you’re moved to pray along with the both of us:

“Father, may I always be kept so busy cleansing my own heart and mind that I never have time to notice whether others are washing theirs. Amen.” 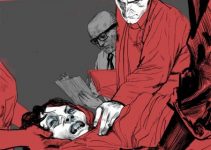