Deacon Greg Kandra is reacting to the Pope’s Friday night virtual audience on ABC’s 20/20 over at Aleteia:

… throughout the hour was no mention of the sex abuse crisis, contraception, gay marriage, women’s ordination, the priest shortage or the dwindling number of Catholics in American pews. Instead, the pontiff spoke poignantly and passionately, as a pastor to his flock, about the necessity of courage, and the need for love, hope, and prayer. In one of the most improbable but thoughtful exchanges, he even talked about soccer.
That occurred when a 19-year-old named Ricardo Ortiz brought up problems with poverty and immigration; Ricardo himself, it was explained, had to take care of his family after his father became sick. Ricardo was later denied a scholarship because he was not a U.S. citizen.
The pope’s response:

We are all responsible for everyone, and to help ourselves in the way that each one can. … Speaking in soccer terms, I would say that the match is played between friendship in society and enmity in society. Each one has to make a choice in his or her heart, and we have to help that choice to be made in the heart.

Reading over the transcript of that response, I’m struck by another compelling aspect of this program: You just don’t hear people talk like that on American network TV.
You don’t turn on a major TV network and hear talk of God’s silence, Christ’s crucifixion, human moral struggles and the agony of the Cross. (In another sequence, the pope warmly praised a single mother for not having an abortion and for deciding, instead, to bring her children into the world. When was the last time that idea was brought up without any criticism or smackdown on network TV?) To hear these topics and others presented so straightforwardly on television, without a trace of cynicism or skepticism is rare. (And that it happened on ABC—which gave the world the gay-centric “Modern Family,” the transgender documentary series “Becoming Us” and the upcoming anti-Catholic “The Real O’Neals”—is downright incredible.)
This leads me to think something else is at work here—something unexpected and, just maybe, something miraculous. This surprising pope from Latin America has not only jolted the Church; he has made possible a media moment without precedent.

I’m continuing to marvel at the show some 3 days later.

I’d like to do a goback to one item referenced by the good deacon in the excerpt.

The pope didn’t just warmly praise the single mother for not having an abortion.  Here’s the actual quote:

“I know that it’s not easy to be a single mother, I know that people can sometimes look at you badly, but I tell you one thing, you’re a brave woman because you were able to bring two daughters into the world. You could have killed them in the womb, and you respected life, respected the life that you had inside of yours, and for this God is going to reward you, and is rewarding you. Don’t be ashamed, go forward with your head held high: “I did not kill my daughters, I brought them into the world.” I congratulate you, I congratulate you, and may God bless you.

No euphemisms there from il Papa.  No attempt to downplay or mince words.

May he continue to speak truth boldly and may those whose toes are stepped on take the opportunity to be introspective about what’s being said rather than reactionary. 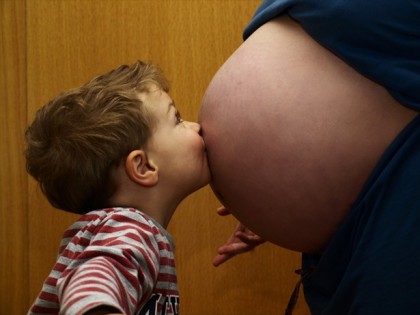