“William-Adolphe Bouguereau – Dante And Virgil In Hell”
Mark Shea with a much needed primer on what Catholicism does (and does not) teach about salvation:

Sometime back, the media got itself all in a tizzy about “the Vatican” supposedly issuing “seven new deadly sins”.  As one particularly egregious headline put it “Recycle or go to hell, warns Vatican”.
Given this view of the Faith, discussions in the press then break down into inane prattle about mortal and venial sin.  Here, for instance, is Slate explaining it all for you:

What kinds of sins aren’t deadly?

The venial ones. The Catholic Church divides sinful behavior into two categories: mortal and venial. (The distinction wasn’t widespread until the medieval period.) Mortal sins are those that the sinner knows are serious but nonetheless decides to perform. They include the seven deadly sins as well as countless others, like witchcraft or skipping out on Sunday Mass. Other indiscretions, including any that were carried out by an ignorant or unwilling sinner, fall into the venial category. So do lesser versions of the mortal sins; for example, mild overeating would be a venial sin whereas gluttony is deadly. With both types, you can wipe the slate clean with confession and repentance, but only unrepented mortal sins can condemn you to eternal hell.

What is absent from all this is any concept of life in Christ as relationship. All you get are rules, written on a card and magnetized to the refrigerator. Break rules on Card A and the Divine Administrator puts in the record that you are slated for Hell. Break rules on Card B and the Divine Administrator marks down the infraction and gives you a warning. Earn enough infractions and the Sin Monitor Task Force transfers your name to the “Go to Hell” file. However, if you do the theological equivalent of filling out a waiver by going to Confession, the Divine Administrator will, for inscrutable reasons, round file your sin folder and let you start over.
The goal of the Christian life, in this scenario, is to die with your sin folder empty. Then God has to let you into Heaven, which is this beautiful place that has nothing to do with Him really. It’s just a pretty park where your favorite dead people have been standing around waiting for you to arrive. The notion of a life of virtue spent trying to cultivate a relationship with God never enters the picture. It’s just a question of keeping and breaking rules. And nobody (in the media) really knows why one rule is more important than another. Indeed, some of the rules appear to have nothing whatever do with anything, if you judge by the portrayal of the media. A mortal sin to miss Mass? That one must have been stuck in by the Church to try to control people. Hey! Everybody lusts. Downgrade that one to venial. And if we are going to have rules to control people, why not put something in there about banning SUVs? Destroying the earth is more serious than missing Mass you know!  Surely God is madder about that (of course, he’s mad about pretty much every infraction so it’s hard to tell.)
In the same way, Hell seems to have nothing to do with relationship in the modern mind. I constantly meet people who think of Hell as an absurdly sadistic overreaction by a touchy God who gets irrationally angry when people don’t keep his arbitrary rules. Or else it’s something that falls on the heads of innocent people like a safe from a third floor window: “How can you believe in a God who would damn to Hell people who were doing their best, just because they never heard of Jesus?”  Prescinding from the fact that the Church believes no such thing, what is striking is that again this notion of Hell has not one thing to do with relationship.

Mr. Shea has more including that which references and completes this post’s title. 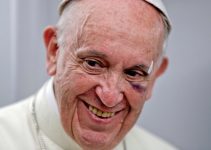