I love conversion stories, particularly those that align in particular ways with my own reversion back to the faith after straying for over 40 years.

I’ve chronicled in part my journey back to Catholicism and some of the issues I’ve had along the way, whether it be with transubstantiation or confession or praying the Rosary.  My reversion was slow, methodical and spanned quite the length of time and included a period of years where I was unaffiliated with any church after being disillusioned and dissatisfied with what Protestantism had become for me.

All that to introduce this personally resonating piece by K. Albert Little explaining how he has come to find Catholicism so extremely satisfying:

After a radical conversion to Christ at the age of about fifteen years old, I lived as a genuinely devout Protestant, earnestly seeking after Christ in my life as best I could. Sometimes, of course, doing a miserable job.
This Easter, after a long journey, I became a Catholic.
My journey began when a Protestant pastor—himself on a journey towards a more ancient faith—asked me the question, “What’s more important the Bible or tradition?” When I answered, like the good Protestant, that it was, “Of course, the Bible.” He followed up by asking, “But who put the Bible together?”
That was the tradition of the Church, of course.
I was subsequently set on a path that lasted nearly a decade. A journey which introduced me to a podcasting priest, some Catholic friends, and even saw meattending Mass a couple of times. But Catholicism held no great appeal to me, at least not until I began to read.
I began to read about Catholicism from authors who were actual Catholics, instead of reading about what Protestant authors thought, or knew, about Catholicism. I found out, in a hurry, that much of what I knew about Catholicism (from the Protestant sources I’ve read, and from the few Catholics I’d met) was inaccurate, to say the least.
If I’d known what Catholics really believed, I would’ve become Catholic a lot sooner.
But I’m a Catholic now.
I read my way into the Church through authors like Louis Bouyer, Pope Benedict XVI, Scott Hahn, Stephen Ray, and G.K. Chesterton. Then I began to live like a Catholic by going to Mass and praying the Rosary and the Liturgy of the Hours.
And then I became Catholic.
If I were to distill my journey into only a few words I would say this. I’ve become a Catholic because I’ve found the Catholic faith to be historically, intellectually, spiritually, and aesthetically satisfying. Although, satisfying is hardly the right word, I’ve struggled to find a better one.

Mr. Little goes on to describe his satisfaction in each of the areas listed and I particularly loved the section dealing with Catholic aesthetics:

When I first started writing about my reasons for becoming Catholic I didn’t include this category because I hadn’t been around the Catholic Church long enough to understand what it meant.
I get it now, and I hope I can explain it sufficiently.
The Catholic Church is aesthetically satisfying in that the language it uses, the level of devotion and beauty, and the message it espouses, surrounds the devout Catholic in a world completely of its own. A completely Christian world.
I was recently talking to a Protestant friend—a friend who’d been baptized Catholic but left the Church—who said one of the appeals of the Catholic Church over her experience of evangelical Protestantism was the level of devotion and reverence for God. That God is truly and deeply worshiped. That’s what I mean, exactly.
In many evangelical Protestant churches Jesus is our buddy, our friend, and there’s nothing wrong with that. He’s that to Catholics as well. But He’s also God, King Jesus, as N.T. Wright says, and He deserves our reverence as such.
That was missing in my experience of Christianity, as an evangelical Protestant.
Likewise, the emphasis on beauty, poetry, and language in the Catholic Church is so rich, and deep, it could take a lifetime just to plumb below the surface. Take a look at any older Catholic Church, even the more modern ones, and you’ll find a richness of meaning in every aspect.
All pointing to Christ. The whole environment.

So very true for me as well.

I encourage a reading of his entire piece whether or not you’re Catholic.  If you are, you’ll identify with much of it and will want to pass it on.  If you’re not, you should at least better understand pieces and parts of the Catholic faith and perhaps have more respect for her devoted adherents.  Perhaps.

Political Attack Dogs
Prosecution to the Full Extent of the Law 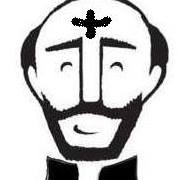