There’s outrage in the hinterlands where the Republican base lives. They’re mad as hell at Megyn Kelly and Fox News. For some people, die hard Trump supporters, they see Megyn as disrespecting their man by asking questions about stuff that doesn’t matter in a Presidential race. Or at least shouldn’t.

There’s rank hypocrisy from the media when they want to make a big deal about Trump’s comments about Rosie O’Donnell or take a comment completely out of context from a reality show while they ignore the fact that Barack Obama sat for twenty years in a church where the pastor – a man Obama said was his mentor and father figure – preached “God Damn America.”

There’s an even larger segment of the base – me included – who thought the format was infantile. “Look Jeb! in the eye and tell him that.” That’s not a debate. That’s an effort to get some infighting going. That, and the fact that the moderators took up over 30% of the time available with their “questions.”

Mark Levin, conservative talk radio host, told Breitbart News Saturday that he thought the debate was nothing more than a ratings gambit.

Levin claims that “We the people” were overlooked in the debate, and the event became a media spectacle with more emphasis on the show’s moderators than on discussing the important issues that face America. “Even today, it’s all about who has Megyn Kelly’s back. We the people, this is our process. We don’t get that many opportunities to go through the primary process. There are only nine debates,” he said.

Just how outrageous was Kelly’s question about the Celebrity Apprentice quote?

Levin complained that Fox sifted through 185 shows and 14 seasons of Trump’s Apprentice and Celebrity Apprentice to come up with “a line that they had to take out of context about some lady on her knees. He didn’t tell her to get on her knees, They brought it up to him. He responded to it, but not in a sexual context.”
The conservative author expressed sincere disgust with Megyn Kelly for pointing to that incident as an example of misogyny. Levin said that Kelly was a “lawyer, she was law review, and she should know better.” He admitted that he blames Fox News management more than Kelly for the outrageous question. He said Fox turned the gathering into a “National Enquirer Debate, and not a Republican Debate. ”

Levin is absolutely right. Trump’s rise in the polls started with his comments about illegal aliens coming over the Southern border from Mexico and committing crimes. In fact, Trump is right on that score.

Illegals have committed more than 30% of all murders in a large number of states. Kelly didn’t want to talk about that. She wasn’t interested in just what Trump’s immigration policy might look like. That’s an important question because Trump is not a movement conservative and he’s not a hardliner on illegal immigration. In fact he said he wanted to build a big wall and put a big door in it.

For his part, The Donald is not backing down.

To that I say, good for him.

To Fox News, and especially the Republican Establishment – including supposedly conservative sites like Redstate, run by Fox News backbencher Erick Erickson – you folks can go to political hell. You’re part of the problem.

This incident proved one thing for sure. The Establishment just isn’t too bright. I happen to think Trump is easy to beat. Make him focus on his policy solutions, that will take away his bombastic megaphone and it will also open him up to questions about his past – donations to Hillary’s Senate campaign, very liberal positions on at least abortion and immigration, and donations to the Clinton Foundation.

By throwing mud at Trump the Establishment is doing nothing but pushing his numbers up. NBC did a pre/post debate poll. Trump not only won it hands down (responders said Carly won the debate and her numbers reflected that) he was double digits ahead of the #2 candidate, Ted Cruz.

With any luck, eventually we’re going to be able to talk about some issues that really matter. Immigration – how do we deal with the illegal aliens already here and how do we stop the flow over the border. The economy – jobs please. Taxes – can we move to a flat tax and get rid of the IRS code that gives them control over much of life as we know it.

We can if the candidates will stop playing the media games and quit responding to questions about other candidates. The correct response to a question like many of those that were asked by the Fox News panelists would be, “I don’t know, ask him/her about that. I’m here to talk about why I should be President.”

Obviously the media isn’t going to be disciplined about their questioning – and they would never ask those questions of Hillary/Bernie/Whoever – the candidates must be. 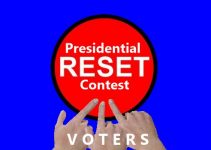