Bill and Hillary are charitable folks. Yes, they make a lot of money, but they also give away a lot to charitable causes. Like themselves. According to their recently released tax returns, they donated $3 million on income of more than $28 million. Not bad. Except that $1.8 million of that went to the Clinton foundation for Global Greed.

It’s true that Bill and Hillary don’t take a salary from the Foundation, but …

While the Clintons do not receive direct compensation from the Bill, Hillary, and Chelsea Clinton Foundation, they do benefit from travel, and many of their longtime aides have served on its payroll.
The foundation has come under fire for its unusual structure. Charity Navigator put the Clinton Foundation on its “Watch List” earlier this year because it said the organization did not meet its criteria due to its “atypical business model.”

“Atypical business model” is the watchword for Bill & Hillary Clinton. They’ve taken a lot heat from groups like the Better Business Bureau as well for – you’ll be shocked – not being transparent .

Hillary has used the foundation to employ her goto boot lickers like Huma Abadeen-Weiner when she was also working at the State Department.

The Clinton family’s mega-charity took in more than $140 million in grants and pledges in 2013 but spent just $9 million on direct aid.
The group spent the bulk of its windfall on administration, travel, and salaries and bonuses, with the fattest payouts going to family friends.

If there’s any justice in the world, the Clinton Foundation will one day result in a RICO charge against Bill, Hillary, and their “children of the corn” offspring, Chelsea. 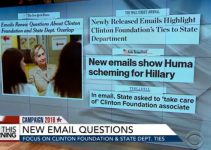