Rev Peterson is no stranger to controversial topics. He challenged blacks, after the death of the thug Michael Brown, for their reaction to a black criminal being killed by police. His commentary struck close to home.

As I watch the racial unrest in Ferguson, Missouri, I can’t help but compare the behavior of blacks in that city to that of spoiled rotten children.

Blacks have been rioting and fighting with police after the shooting death of a thug, Michael Brown. And white political and law enforcement leaders have given in to their tantrum like weak parents.

That’s a well deserved rebuke not just to the black community, but to American culture as a whole. We seem to have turned from a “nation of laws” to a nation of people desperately wanting others to like them. It’s called being a Progressive. That’s why we overlook this. He pointed out how Gov. Jay Nixon (D-MO) immediately surrendered to the race baiters with his immediate demand that the officer be prosecuted.

Nixon tried to appease the black mob and prematurely called for a ‘vigorous prosecution’ of Officer Darren Wilson.

Fortunately for Wilson, the grand jury that heard all of the evidence – something Nixon knew nothing about at the time of his incendiary comment – saw things differently. The grand jury members had no problem recognizing a punk and a thug. Nixon, on the other hand, couldn’t surrender fast enough.

The same thing happened in Baltimore where the Mayor and the State’s Prosecutor gave in to the mob and acted before the investigation of the police officers was completed. The result may be that the prosecutor may well have overcharged the cops and even if they’re complicit in Freddie Gray’s death they may walk because of prosecutorial – and political – incompetence.

And what if whites said “No” and didn’t spare the rod of truth when they’re attacked as “racists”?

The unfortunate part of the equation is the last line of Rev. Peterson’s editorial.

This kind of transformation is possible for America, but only “if …” 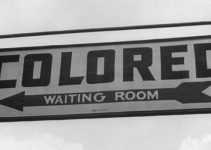