Home
2nd Amendment
Pope Francis: If You Have a Gun You’re Not a Christian

Pope Francis expanded what it means to be a Catholic in these latter days by Papal fiat. According to the Pontiff, if you manufacture, invest in, or own a gun, you’re not a Christian. Specifically, he said the following .

“If you trust only men you have lost,” he told the young people in a long, rambling talk about war, trust and politics after putting aside his prepared address.
“It makes me think of … people, managers, businessmen who call themselves Christian and they manufacture weapons. That leads to a bit a distrust, doesn’t it?” he said to applause.
He also criticized those who invest in weapons industries, saying “duplicity is the currency of today … they say one thing and do another.”

This comes from mouth of the leader of the same Church that teaches abortion is murder (it is) but refuses to discipline politicians who call themselves “Catholic” and yet vote to fund the organizations that murder millions of unborn every year.

Pope Francis, we’d suggest you change your name to Pope Hypocrite. And while we’re at it, we feel all the more comfortable being an Evangelical Christian.

By the way Pope, if I ever do find myself in a Catholic church you’ll want to bet that my Glock is on my belt.

How Do You Rate on Deadly Sins?
Toddler Dies From Ear Infection - Parents Charged With Manslaughter
Tags:2nd Amendment 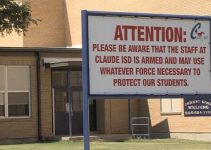