You can check the web address, you’re not reading The Onion. Actually, we believe CNN and MSNBC, etal, will eventually put The Onion out of business. The CNN anchor actually called an attack on the Dallas PD HQ “courageous and brave.” Check the branding on the video, it’s not Al Jazeera, it’s CNN.

There were actually a variety of things that the major media completely blew on this story. It was initially reported that there were “multiple” gunmen (gun-persons?) involved when there was only one shooter.

Next, and very telling of reporters’ general knowledge, it was reported by multiple sources that the Dallas PD took fire from “automatic weapons.” In fact, the firearms were “semi-automatic.” This is a common mistake because reporters can’t seem to get it through their heads that an “automatic weapon” fires multiple shots with one trigger pull and a “semi-automatic” fires one shot per pull.

We’re shocked that so far no media outlet has tried to link the shooter with the Tea Party. For the record, the guy is a nut case.

Dallas Police Chief David Brown said the suspect identified himself to authorities as James Boulware, and he blamed police for having lost custody of his son and for “accusing him of being a terrorist.”

Assuming the DPD actually accused him of being a “terrorist” we’d say they weren’t far off the mark. At any rate, all’s well that ends well as announced by the Dallas Chief of Police.

Getting hit with 50 caliber rounds typically ends the threat.

Next up, calls for more gun control. 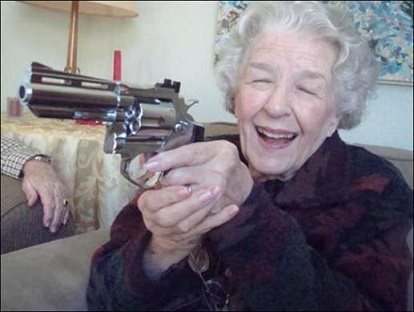