Marilyn Mosby is the state’s attorney in Baltimore, she’s the prosecutor who indicted the six Baltimore cops in the death of Freddie Gray. The woman is absolutely incompetence on parade.

For a short run down, she charged the six cops – who may or may not be guilty of anything with respect to Freddie Gray’s death – before the investigation was even close to being completed. The charges, according to legal experts, may not be sustainable at trial even if the cops are responsible for Freddie’s death because she’s overcharged them.

Here’s Mosby blowing her own horn, more on that in a second, and then getting knocked to the ropes by a simple question.

First, let’s talk about her great work with the cops over the last six months.

Here’s the arrest data for Baltimore this year vs last year. Please note that Freddie Gray’s death and Mosby’s appearance as a high profile prosecutor and civic leader happen mid-April. So Mosby thinks she’s doing a great job because they’ve knocked off three bad guys. That’s the equivalent of Obama promoting taking out bin Laden while promoting policies that let ISIS take over Iraq, Syria, and Libya. Mosby’s policies are causing arrests to plummet which, even with all of the top ten off the list, make the city’s streets significantly more dangerous.

We’ve also got a little problem with murders in Baltimore. In May, Baltimore had 42 murders, more than they’ve seen in a month since the 70s. So far in June, through the 8th, they’ve had 13. That’s 55 murders in 39 days. Once again, record numbers of murders while she’s patting herself on the back for the arrest of three bad guys.

And then we’ve got her insistence that there is no reason cops should feel she doesn’t have their back.

Obviously, Ms. Mosby not only has no clue, or at least isn’t willing to admit it, that there’s a problem in Baltimore, and the problem is her.

We can’t wait to see the arrest and murder numbers for June. It’s going to be a very long hot summer.

15 Years Old, 7'3" - Where Can We Buy Stock in This Kid??????
Obama's Desire So Bad That Even The Democrats Know It
Tags:Baltimore, Black Lives Matter, Racism 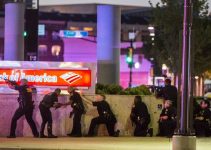