There’s never been a liar like Bill Clinton. Some people will argue that Hillary is equally able on that front, but they’re simply deluded. Certainly she is lying if her lips are moving, but Billy is in a class all by himself.

We say Bill is at the top of his game because, not only did he get away with those beauties, he’s actually celebrated in a major portion of US political culture because of them.

Which brings us to his latest whopper.

Again, a adoring audience, a softball questioner, no follow-ups, responding to a question with a question and then answering it. The perfect dismissal, and how could anyone question the man’s sincerity or his honesty.

Well, believe it or not, Chris Cillizza at, of all places, the Washington Post had the audacity to say this .

Um, what?
This is the latest in a string of statements by the former president that suggest he still doesn’t grasp why the Clinton Foundation questions continue to swirl and, because of that lack of understanding, remains unable to effectively parry them .

At this point we need to take issue Cillizza on a fairly major point. We’re pretty sure the Clintons don’t feel the need to parry those questions. After all, Hillary could get at least 43% of the vote if she hung out at her New York hovel … … and baked cookies for the next seventeen months. They are The Clintons. America’s royalty. They answer to no one.

Anyway, back to Cillizza, he does follow up nicely. He points out the fact that the donations to the Foundation are viewed as objectionable by lots of people.

So, on its face, the claim that no one has come forward to object to certain donations/donors is just not right.
Then there is the fact that Clinton’s answer on the foundation seems to be based on the idea that he and his wife are operating in a legal sphere for the next two years. They’re not. They’re living in the world of politics — and the rules of that world are far different than those of a court of law.
Clinton’s argument boils down to the idea of a burden of proof. As in, if there’s something truly objectionable in what the foundation has done, then someone should prove it.

Again, we fall back to the definition of “is.” 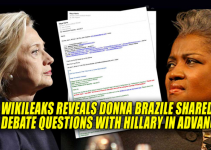