That’s right, Ralph Nader. The Ralph Nader who was the Green Party candidate for President. Ralph Nader who is probably a little to the left of Bernie Sanders. He’s a – or at least should be – hero to all conservatives. For two reasons we can come up with before our first cup of coffee is done.

First, if it wasn’t for Ralph Nader, Al Gore would have been the 43rd President. Gore most certainly would have won the 2000 election by winning Florida. Pay attention to the little black line at the bottom. That’s Ralph Nader. He got 4% of the vote and those Green Party voters, at least enough in Florida to throw the state to Gore, would have changed the election results.

And then we have today. Ralph is on a tear about Hillary. Check this out.

We love the fact that every week is more of a drip, drip, drip of bad news for Hillary. We’re going to be celebrating the emails coming out every other month for the next six months, and then we have a constant stream of criticism from people like Ralph.

“Deep corporatist and a deep militarist.” If that doesn’t give the Democratic base second thoughts, not much will. Hillary is in the pockets of the big money bankers on Wall Street, and even more so with the big money interests in foreign governments. Hillary is not now, nor has she ever been, a friend of the poor or the middle class in America. Heck, she’s not even a friend of rich, except to position herself to move money from their pockets to hers. “She moved to New York with Bill because that’s where the power is and Wall Street…” Tell it Ralph!

He also happens to be right on the money with respect to Libya. It’s her war. The Pentagon was opposed, the White House didn’t have an opinion, and she pushed us into a no-win situation with absolutely no plan for what would happen after we helped topple the government.

We’re sure that one of the reasons she’s running from Benghazi is because there were weapons moving through there to insurgents.

Anyway Ralph, keep up the good work. We hope we’ll be hearing lots more from you over the summer. 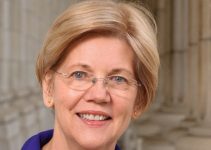