Hillary’s numbers are going to Hell in a handcart. And we’ve still got a thousand scandal announcements to go before theprimaries.

The ClintonNewsNetwork is saying that Hillary is “hitting a speed bump” in her campaign. Here’s some news for you CNN, Hillary’s got a name recognition factor of 100%. Her numbers were NEVER going to be better than on the day she announced.

So, it’s just coming to light that people don’t trust her. Or think she’s honest. She doesn’t inspire confidence. Gosh, that was “unexpected.”

We’re pretty sure that CNN, etal will look back on this report as a fond memory in a few months. Hillary is facing, at a minimum, a new roll-out of State Department email every two months for the next seven months. She’s facing a RICO lawsuit in Florida that will gobble up headlines from time to time. She’s got that poster girl for the Right Wing Conspiracy, Carly Fiorina chasing her around actually answering questions from the press. Oh, and it appears she’s starting to piss off the press corps because she won’t take questions.

And remember, that’s just for starters. It’s not likely to get any better.

The Russian reset isn’t exactly a howling success, what with Russian fighters buzzing our navy ships. As a matter of fact, all of the foreign policy she presided over looks pretty dim right now. And don’t expect to look back on this time and say, “It’s always darkest before the dawn.” 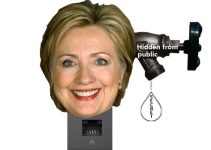