Barack Obama wants your guns. He’s said over an over that he “respects gun rights” and “only wants common sense measures” that will keep mass murderers from getting their hands on guns.

He’s got a little less than two years in office and he’s about to launch a new attack on gun rights, one executive order at a time, and it’s looking like a coordinated attack with members of Congress and the Surgeon General chiming in as well.

As background, here’s Obama talking about his love for the Australian solution to guns.

Their solution, by the way, was to confiscate every gun in the country and destroy them. And what’s been the result of Aussies panic over guns? 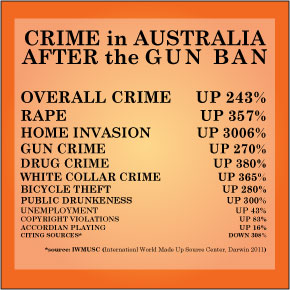 That’s what Democrats envision for us. Home invasion up 3000%.

The Justice Department plans to move forward this year with more than a dozen new gun-related regulations, according to list of rules the agency has proposed to enact before the end of the Obama administration.

The regulations range from new restrictions on high-powered pistols to gun storage requirements. Chief among them is a renewed effort to keep guns out of the hands of people who are mentally unstable or have been convicted of domestic abuse.

That’s just the first part, next comes Congresswoman Carolyn Maloney of NY. A Democrat. She wants to require gun owners to have up to $10M of liability insurance on their gun. There’s a $10,000 fine if you are found to not have insurance. She wants to raise the cost of gun ownership to take that fundamental Constitutional right out of the hands of poor people.

And last, at least for the moment, is Surgeon General Vivek Murthy. He said, at his confirmation hearing, “I do not intend to use the Surgeon General’s office as a bully pulpit for gun control.” You can tell he’s an Obama appointee, he lied. That was then, this is now.

In a series of tweets, he wrote this:

In the NPR interview, Murthy was asked to explain this tweet:

“All kinds of violence.” Right. The only kind of “violence” he’s interested in would be gun violence. He’s long on record as wanting to ban all “assault rifles,” guns like the AR15 and AK47. Here’s the truth that bares his lie.

If Murthy cared about “violence” he’d be going after a ban on hammers. In 2011, 323 murders were committed with all types of rifles. 496 murders, according to FBI statistics were committed with a hammer. Why not go after hammers, Vivek? And while we’re at it, twice as many people were murdered with fists as with rifles.

The Obama administration, following the lead of the President hates guns with a passion. They want yours.

What are you going to do about it?

Democrats Are In Control, Crime is Skyrocketing
Dear GOP Candidates: It is bad optics when you've Duggar self into a hole.
Tags:2nd Amendment, gun control, guns