With the talk of how bad Islam is for civilization and the question of just what to do about it, we are seeing those lightly informed about American history claiming that our founders–in particular George Washington–warned us to stay out of “foreign entanglements.” In fact, however, Washington neither said this, nor meant for such a policy to be enacted.

Many on the left and the isolationist right try to use the father of our country to support their ideas against the GOP and to justify their hope that the USA will pull out of the Middle East. Specifically they cite Washington’s farewell address where a retiring president supposedly warned Americans against getting involved with foreign nations and getting caught up in those evil “foreign entanglements.”

On one hand, it is quite amusing to see lefties in love with a founding father or American history and principles for the first time in their lives, certainly, but it isn’t just the left revealing a sudden respect for a founding father with citation of Washington’s address. On the other hand those Ron Paulites and his isolationist wing on the right have for years been bandying about Washington’s farewell address as some sort of “proof” that one of our “first principles” was to stay away from foreign nations.

So, what was Washington really saying? Did he warn us against “foreign entanglements”? Did he think the U.S. should steer clear of all outside political situations and relegate ourselves only to trade with foreigners?

That dispensed with, we move on to the assumed isolationism of George Washington’s address. What did he mean and did he mean it to be a permanent principle from which the U.S. should never stray?

First of all we must realize that the U.S. had been up to its neck in “foreign entanglements” before it had even become a nation. With wars against the French decades earlier, then the rebellion against Britain with help from the French, pleas to the Dutch for loans, not to mention intrigues in Canada and clashes with Spanish holdings in the new world, the progenitors to the United States, with all that our nascent nation was already a key player on the international stage.

Further the United States had envoys in most of the major European nations long before Washington’s farewell address. So, to say that the U.S. was isolated from the rest of the world and that Washington’s entreaty meant for us to stay that way, to say that this was some axiomatic delineation of American foreign policy is a wrong headed claim. The U.S. was already so “entangled” that it couldn’t be untangled.

One of the important goals of Washington’s letter was to shore up his own foreign policy decisions. Washington had angered the Jefferson/Madison wing of the federal government when he decided not to side with France against England after our revolution ended. In fact, while leaning toward being an anglophile, Washington tried to tread a fine line of “neutrality” between France and England. His farewell address was in part meant to justify a policy choice he had made as president. It was less a doctrine for the ages and more an immediate act of politics.

There was also an important bit of reality that caused Washington and Alexander Hamilton to eschew full support of France and lean toward England. We didn’t have the naval power to back up any major involvement in Europe. In fact, if we had decided to jump in with France, there was no way at all we could have escaped major damage from the extensive and powerful British Navy if we sided too directly with France.

Washington’s idea of neutrality was based in part on the complete inability of the U.S. to back up its foreign policy. But even in that case he did not say in his address that we should forever stay away from any foreign involvement.

Here is the key section of his address:

It is our true policy to steer clear of permanent alliances with any portion of the foreign world; so far, I mean, as we are now at liberty to do it; for let me not be understood as capable of patronizing infidelity to existing engagements. I hold the maxim no less applicable to public than to private affairs, that honesty is always the best policy. I repeat it, therefore, let those engagements be observed in their genuine sense. But, in my opinion, it is unnecessary and would be unwise to extend them.

To warn Americans against “permanent alliances” really should go without saying. Decades later a fast friend of the United States basically said the same thing when he, Winston Churchill, said there are “no eternal allies” and “no perpetual enemies” for any nation.

Washington went on to say, though, that sometimes we must form alliances. “Taking care always to keep ourselves by suitable establishments on a respectable defensive posture,” he wrote, “we may safely trust to temporary alliances for extraordinary emergencies.”

Obviously he understood that always staying neutral–as Paulites and liberals maintain–is not possible.

It should also be realized that this was Washington’s (and Hamilton’s) vision. The farewell address was not an explication of standard practice even when it was written, but Washington’s ideals. Many founders disagreed with this vision. So to act as if an isolationist policy was a singular founding principle is a horrible misread of history.

In To the Farewell Address, the seminal book about Washington’s document and the era in which it was given, Felix Gilbert warned us all not to accept these flawed misconstructions we are discussing here as an explanation what was going on with Washington’s farewell address.

In the conclusion to his essay, Gilbert wrote:

Because the Farewell Address comprises various aspects of American political thinking, it reaches beyond any period limited in time and reveals the basic issue of the American attitude toward foreign policy: the tension between Idealism and Realism. Settled by men who looked for gain and by men who sought freedom, born into independence in a century of enlightened thinking and of power politics, America has wavered in her foreign policy between Idealism and Realism, and her great historical moments have occurred when both were combined.

In other words, today’s neo-isolationist view of America’s “real” foreign policy ideals is woefully incorrect. The U.S. was never isolationist as a first principle. Ron Paul and his isolationists are wrong and so are the liberals who have a sudden and uncharacteristic respect for a founding father.

Finally, it must be noted that this article of mine is discussing only one thing and that is the purpose of Washington’s farewell address when it was delivered in 1796 and what it means to American first principles. I have no interest in using this piece to excuse or justify anything that happened after Washington left the scene. This article is not meant to ascertain what amount of foreign policy is optimal, only that isolationism is not an American first principle.

If WWI or WWII were wrong or our Middle East policy is misguided, those are discussions for other articles, not this one. 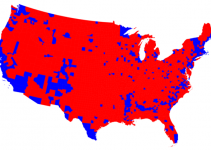