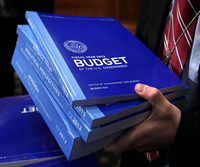 It is absurd that the GOP didn’t push a continuing resolution that only tides the government over for a few short months because next year the GOP will be in full control of both houses of Congress. Yet, the GOP was not just *sighing* and agreeing with this nine-month spending bill, GOP leadership was pushing it. This is a bill that will cut the GOP out from having any influence on spending for most of their first year they are in control.

Still, many of the hundreds of policy riders–little bits of instruction that affects spending–are good for the conservatives. Of course, some will upset Democrats and some Republicans.

Anyway, here are some of the riders of interest in the new budget bill (in no particular order):

The bill fully funds Obamacare, though it does put a limit to any growth in spending and cuts the budget by $10 million for the “death panel” board called the Independent Payment Advisory Board. It also does not give the IRS any new funding so that the taxing agency can implement the Affordable Care Act.

In a victory for farmers, the spending bill will prevent the EPA from taking upon itself the power to regulate farm ponds and ditch water. This is also a victory for Republicans–not to mention the country!

Speaking of the EPA, its budget was cut by $60 million over last year’s budget. The EPA will get $8.1 billion. This is another decrease. Since 2010 the agency has lost 21 percent of its budget.

No Pot Legalization for Washington DC

The City Council of the District of Columbia will be prohibited from legalizing marijuana and will be forced to hew to the federal ban on pot. On the other hand, federal drug enforcement agencies and law groups will be prevented from interfering in state-based pot industries.

Despite that Senator Harry Reid wanted this stripped out, the ban on putting a federal tax on sales on the Internet is still in place.

Unions Given a Handout

Earlier this year Obama announced that he wanted to end the US control over the Internet Corporation for Assigned Names and Numbers (ICANN) that assigns new names and numbers on the Internet and hand it over to foreign control. This bill puts an end to that at least until the budget period ends. This section prevents Obama for doing this next year as he wanted to.

Obama had a plan to bail out big insurance with what he called “risk corridors.” This has been blocked.

Liberals wanted to put the sage grouse on the list of endangered animals. This would have destroyed the economies of several western states. The move to put the bird on the endangered list was blocked with the CR. There is $15 added to help conserve sage-grouse habitats, though.

Staying true to decades of spending rules, federal spending on abortion is still blocked with this new budget.

The wasteful Amtrak national rail system will still get the $1.39 billion it got last year. No increase.

Government Workers Get a Raise

Federal workers will get an undeserved 1 percent raise with this spending bill.

The IRS will lose $345.6 million from its budget. The bill also tries to prevent the IRS from targeting organizations seeking tax-exempt status.

Immigration
The bill funds the Department of Homeland Security only through next February. But, as the Washington Post confirms, new money is going to other immigration plans. “But negotiators gave new money for immigration programs at other federal agencies. There’s $948 million for the Department of Health and Human Service’s unaccompanied children program — an $80 million increase. The program provides health and education services to the young migrants. The department also gets $14 million to help school districts absorbing new immigrant students. And the State Department would get $260 million to assist Central American countries from where of the immigrant children are coming.”

The ban on incandescent light bulbs is put on hold.

Despite that federal workers are getting a raise, pay for the Vice President and other senior officials is frozen but so is the pay for the leaders of our soldiers. Generals and senior staffers of the military will also see a pay freeze.

Assistance to the Palestinian Authority Ended

The Palestinians will no longer get federal assistance but only if the PLA becomes a member of the United Nations. It also prohibits funding for Hamas.

Race To The Top Defunded