Hillary Clinton and Massachusetts Senator Elizabeth Warren, both rumored to be in the hunt for the 2016 Democrat nomination for President, appeared at the same event last week prompting Clinton to praise Warren as a “passionate champion for working people.”

As one of the nation’s most well known Democrat women, Hillary Clinton is certainly expected to throw her hat in the ring for the 2016 Democrat nomination for President. But there is another up-and-coming woman of the (far, far) left who is dallying with the same decision. Senator Elizabeth Warren has slowly begun to soften her stance against running going from a solid “no” to a “we’ll see what happens.”

In April, Warren had told ABC that she was absolutely not running for president. But by October her stance had softened considerably.

In a recent interview with People magazine, Warren said that she has learned not to “be so sure what lies ahead.” This is quite a difference from her previous straight out statement of “I’m not running for president.”

But despite that they may be opponents in the upcoming Democrat primary, last week Clinton praised Warren at a rally for Massachusetts Democrat gubernatorial candidate Martha Coakley.

“I am so pleased to be here with your senior senator, the passionate champion for working people and middle class families, Elizabeth Warren,” Clinton said in her remarks at the rally.

“I love watching Elizabeth, you know, give it to those who deserve to get it,” Clinton added.

In her own remarks, Warren merely welcomed Clinton to the rally and thanked her for attending.

Warren has a history, though, of refusing to give Hillary too much praise. Two months ago, for instance, the Mass. Senator took a pass on praising Clinton preferring to dodge a question on whether or not Hillary was “the best choice” for the Democrat Party in 2016.

Supporters of Warren have been pushing the Senator to run for President for months. Many support Warren because Hillary is not far enough left to suit them.

Warren is a pure socialist, though. She was the one who goaded President Obama into claiming that “you didn’t build that,” when he maintained that business owners didn’t build their own businesses but that government is responsible for everything. In fact, this line of lies was created by Warren.

Elizabeth Warren is a flagrant socialist so if she challenges Hillary it will be from the left. 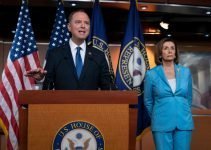