In Houston, Texas, liberals are again at the forefront of violating the Constitution to aide their special interest groups by oppressing both freedom of speech and freedom of religion.

City officials of the left-wing city have obtained a subpoena demanding that local ministers and pastors supply their sermons to the city ahead of time so that officials can screen them for “hate speech” against gays and most especially words against the openly gay mayor of Houston, Annise Parker.

The city also says that those ministers who refuse to turn in their sermons for approval by city officials, they will be held in contempt of court.

So much for all those silly Constitutional rights, and stuff, eh?

But the city council is getting push back and rightfully so.

“Political and social commentary is not a crime,” Christina Holcomb, attorney for the pastors, said. “It is protected by the First Amendment.”

The Alliance Defending Freedom is taking on this case and filed a motion in a Texas court to stop the city from this abject violation of the Constitution.

In a statement, attorney Christina Holcomb said, “The city’s subpoena of sermons and other pastoral communications is both needless and unprecedented. The city council and its attorneys are engaging in an inquisition designed to stifle any critique of its actions.”

“The message is clear: oppose the decisions of city government, and drown in unwarranted, burdensome discovery requests. These requests, if allowed, will have a chilling effect on future citizens who might consider circulating referendum petitions because they are dissatisfied with ordinances passed by the City Council. Not only will the Nonparty Pastors be harmed if these discovery requests are allowed, but the People will suffer as well. The referendum process will become toxic and the People will be deprived of an important check on city government provided them by the Charter.”

As Todd Starnes of Fox News reported, one of those slapped with a subpoena is Steve Riggle, the senior pastor of Grace Community Church.

“This is an attempt to chill pastors from speaking to the cultural issues of the day,” Riggle said. “The mayor would like to silence our voice. She’s a bully.”

This subpoena is outrageous, but it dos show that liberals just don’t care anything about the Constitution and feel that the law is a weapon that should be used to destroy political opponents.

But, I guess you can’t fault the lefties on the Houston city council. After all, their president has made a career out of violating the law and using his power as a weapon to destroy Americans. There is no rule of law in the United States any more. It is everyone against everyone and this hateful climate was created by the Democrat Party. 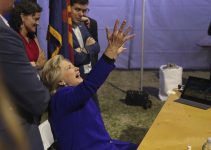